Canberra is a beautiful city, and spring is one of the best times to experience it. While walking through Garema Place in Civic last week, I saw a young boy playing on one of the numerous pieces of public art, on a beautiful sunny spring day. He had his Matchbox and Hot Wheels cars out, and was intently focussing on their movements.
His mother was sitting close by so I asked if I could photograph her son. His name is Manu. 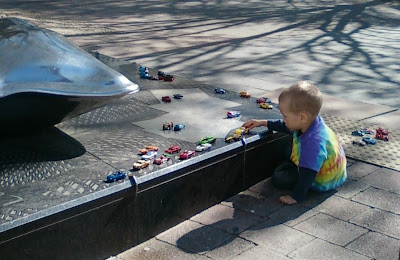 In his imagination they are going somewhere, all his cars are facing left. 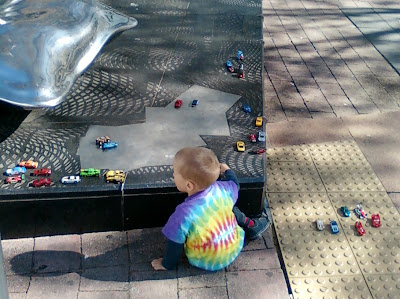 I think they have all reached their destination...
Being a diecast collector I did have a look over his cars. All three inch, largely Hot Wheels and Maisto, with one or two Matchbox. There were none I needed for my collection. His mum was fine with me taking his photo, I don't know how she would have taken to me negotiating a swap for a required car! Even though they are being played with, they didn't look too playworn. Manu seems to care for his cars.
I guess its easy as an adult diecast collector to forget that once I was like this little boy playing with his toys and creating a whole world in his imagination.
Posted by D.C. Haas at 3:14 AM

Email ThisBlogThis!Share to TwitterShare to FacebookShare to Pinterest
Labels: 1:64, hot wheels, maisto, Matchbox, why i collect