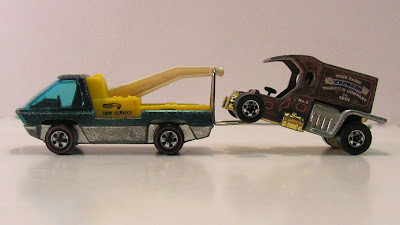 1970 Tow Truck and 1979 T-Totaller
Every diecast collector has a favourite model, and this is one of mine. Its the 1970 Hot Wheels Heavyweight series Tow Truck. This casting only appeared for 1970 and then disappeared from the Hot Wheels range until it was brought back in 2004 - 34 years after is only appearance! It was then used a few more times, but not since 2008. 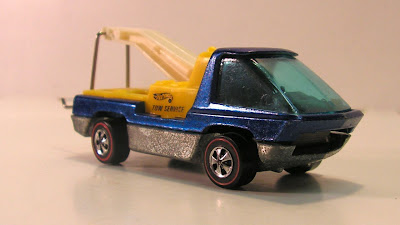 1970 saw several releases in a new subrange called 'Heavyweights' which included some articulated models. They were all very similar to several Matchbox models. In fact the HotWheels Tow Truck is very similar to the Matchbox 'Toe Joe'. 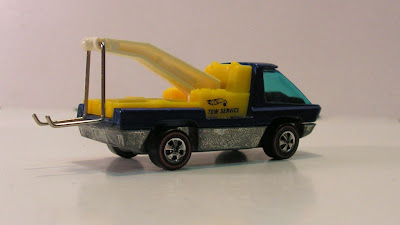 Designed by Ira Gifford, the model appeared in the full range of Hot Wheels Spectraflame colours, all versions featuring the blue tint plastic window and a tiny 'Hot Wheels Tow Service' logo on the rear yellow plastic. Still part of the classic era, it features a metal base, a metal body and redline wheels. 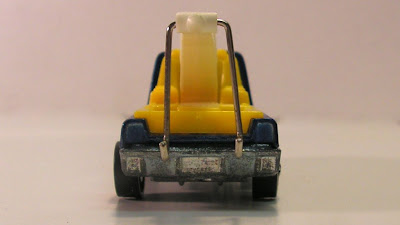 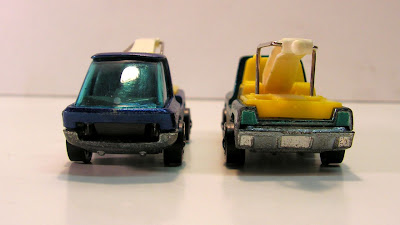 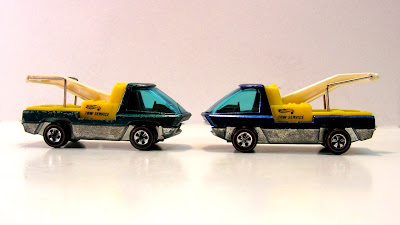 The towing hook is quite interesting. Most toy tow trucks have plastic hooks, the Hot Wheels Tow Truck has a wire hook, which is attached to a plastic boom. Its really quite effective in its intended use of towing other Hot Wheels cars, indeed they do stay on the hook when being moved around. The wire hook also folds forward and nestles quite snugly in the rear plastic bed, tucked neatly and safely out  of sight. To deploy the hook, you press down on the boom and the hook sort of 'pops' out enough for you to flip it over to use. I doubt that in todays more safety conscious era a bare wire hook would be permitted on a child's toy! 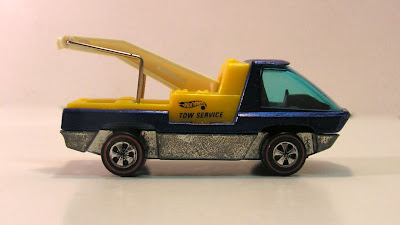 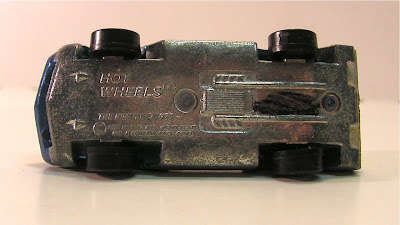 Although you could aim to collect one of each colour of the 13 original 1970 versions, sometimes you have to be happy with what you have. I am fortunate to own two nice examples in pleasing colours. The two shown here are Spectraflame Blue and Spectraflame Aqua. Mint loose versions are worth around US $60 each. Mint carded versions in Spectraflame Pink or Spectraflame Salmon are worth US $325. These values are relative of course. For a one year only casting scarcity itself makes the model collectible.
To the rating:
1970 Hot Wheels Tow Truck

Where Hot Wheels cars are designed

The popularity of the Hot Wheels Ford Falcon XB in Australia has been very high since its release in late 2009. With the yellow and blue versions being snapped up as soon as they hit the pegs, it was odd that this car, part of the Hot Wheels Garage series, was released - on the US market only in late 2010. 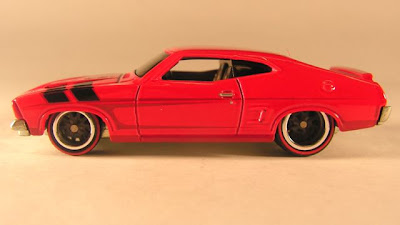 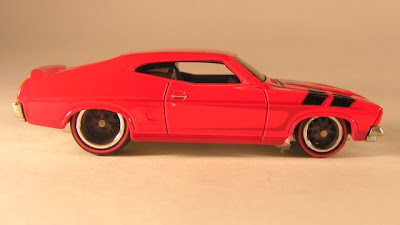 The difference between this car and the regular Hot Wheels cars is that it has a metal base, a metal body and different wheels with real rubber tyres. There is also a higher level of detail, as can be seen by the picked out headlights. 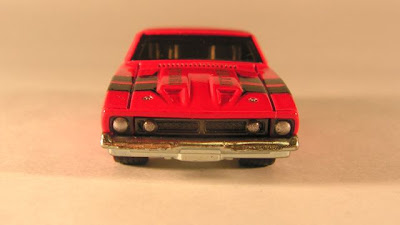 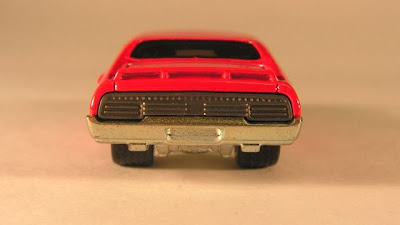 The paint job is a custom paint scheme, unlike the factory GT paint scheme used on the yellow and blue castings. This red paint scheme is very attractive with the bold black stripes radiating off the bonnet and ghost scallops starting on the front fenders. 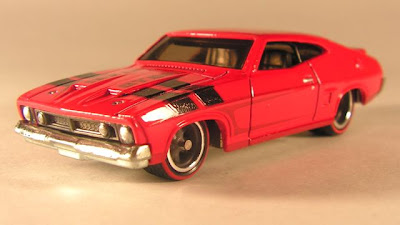 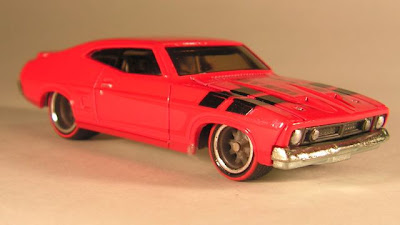 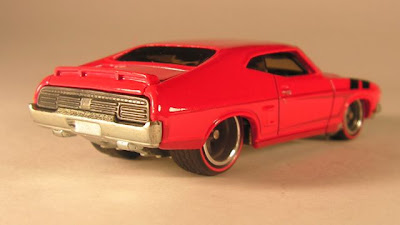 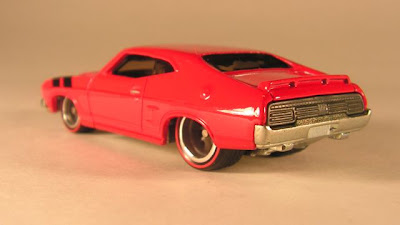 Even though this casting is metal/metal and has extra detail and rubber tyres, there are a few anomalies - the rear brake ducts and fuel cap are painted over in body colour and once again the tampo paint machine has missed the rear lights. 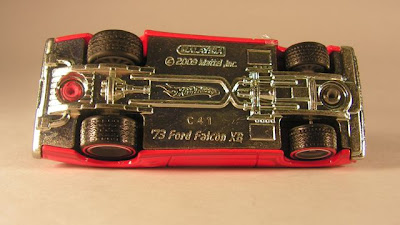 This car is only available in the U.S. and even there sells at a premium, roughly the same as a Lesney Edition Matchbox car. It is an attractive car and essential for any Ford Falcon model car collector. 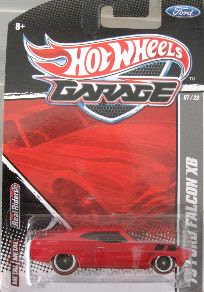 Since late 2009 Hot Wheels have released three Ford Falcon XB Coupes in Yellow, Blue and Red. It has been an enormously popular casting for Hot Wheels and some very high prices were paid for them on Ebay, although that fervour has now died down. 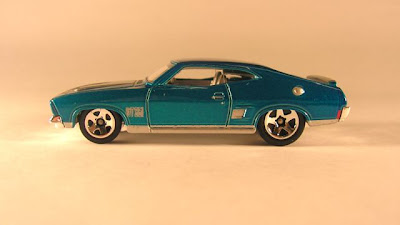 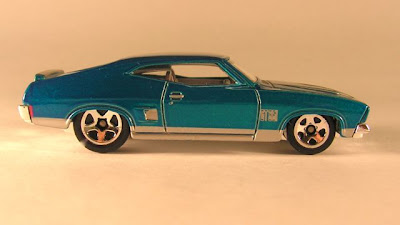 The blue really suits the casting, and the same GT paint scheme as used on the yellow version has been applied here, although the contrasts are silver not back. 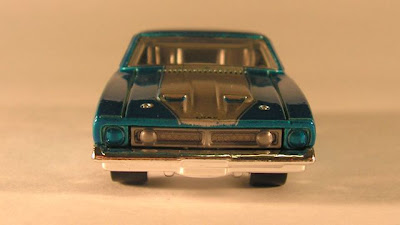 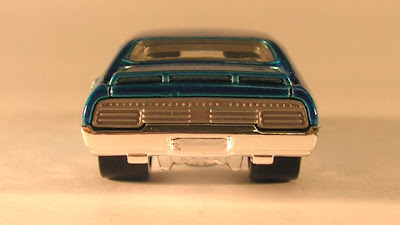 The same criticisms I mad in my initial review still apply. There are some inaccuracies and the tampo paint could have been used a little more wisely. 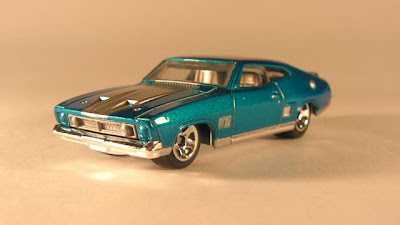 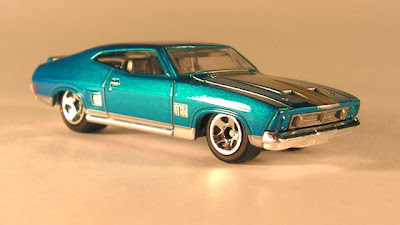 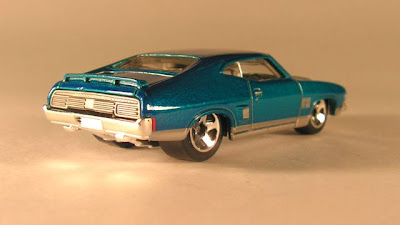 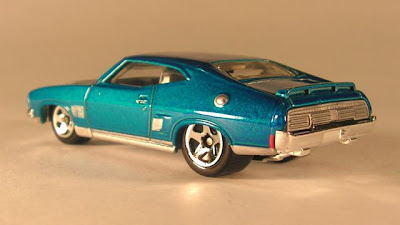 I can see this casting staying in the Hot Wheels range for many years to come, and the enormous popularity among collectors for both unmodified versions and code 3 custom versions remains strong. 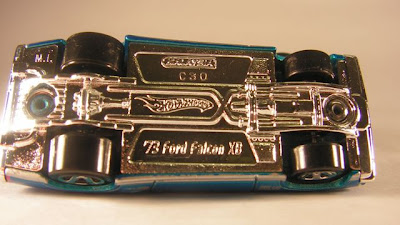 Hello to all the diecast fans that view my blog, and apologies for the lack of activity recently. I will be posting a series of articles over the next week or two, which I hope makes up for the lack of quantity over the last month or so.

Why the inactivity ? Its pretty simple - I mislaid my camera! I found it again about a month ago, and have just taken some more photos of diecast.

I have been writing some articles which will be in a new online based diecast magazine. The first issue is scheduled for the end of June and I will post details on this blog when it is available.
Posted by D.C. Haas at 4:38 AM No comments: