Every subculture has its own jargon, or shorthand. It occurred to me that some people may not know what a 'Code 3' diecast model is. A brief rundown on terminology follows.
The 'codes' relate to the condition and modifications on a particular model.
Code 1 : A standard model as it comes from the manufacturer. Only ever called a Code 1 in a guide like this.
Code 2 : A standard model from the manufacturer but with differences in packaging or badging. An example could be a promotional model of a Trabant made for say Capital Diecast Garage by the manufacturer, and I decide to rebox it or apply an extra sticker to it. Another example is the application of aftermarket decals to models such as Brock HDT Commodores that are produced without tobacco company signage in accordance with legislation.
Many people collecting Brock cars are unwittingly becoming Code 2 artists, when they purchase decals from places such as Pattos Place to ensure that the model they have is accurate and not inaccurate.
Code 3 : Massive changes made to the appearance of the model without the permission of the manufacturer. This can include new or different decals, changing the paint scheme, different wheels, swapping components, or a massive redesign using a base model and turning it into something different. Some Code 3's are good quality, and others atrocious. 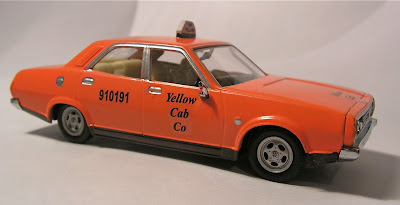 Code 3 from 'Santers Workshop' note poor painting of detail, inaccurate paint around upper doors and sloppily applied decals. Even the wheels are wrong, I doubt a taxi ever used Targa Florio mags! It looked OK in the Ebay ad. Caveat Emptor.
If you are offered or buy a Code 3, you should be advised that it is a Code 3 and not represented as a factory original version of a particular model. That is fraud.
Some people like collecting Code 3's and others frown upon it. My opinion is that as long as its not represented as something it is not, then enjoy the Code 3. You can find interesting examples of cars which you might never see if someone hadnt attempted to Code 3 a car. 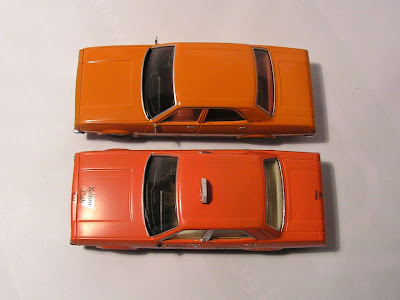 Original Trax P76 at top, Code 3 at bottom of photo. Correct colour paint for Yellow Cab, but sloppy detail work has ruined this model.
Posted by D.C. Haas at 8:39 AM