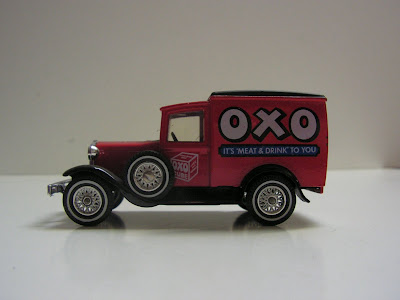 Exiting the Garage is an old friend, the Y22 Ford Model 'A' Van in 'OXO' livery from the venerable Matchbox Models of Yesteryear range. A stunning red and black livery complements the OXO printing on the body, and a nice black roof adds to the vintage touch.

Matchbox churned this model out in several different variants and colour schemes during the 80's, but this was the first of the Y22's. It would have been purchased in the early 80's from Wayside Hobbies in Ringwood, Victoria. 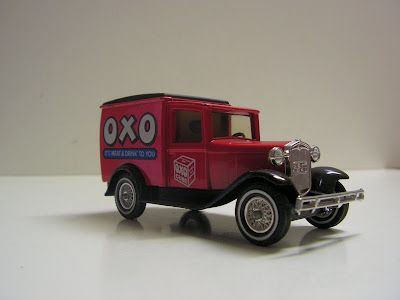 This particular Y22 is in the first livery offered and is an early 'Made in England' Y22, before production shifted to Hong Kong. Oddly, it is in a box that mainly appeared with the Hong Kong cars, in brown and maroon with gold lettering, but it is the box the model arrived in.

If someone knows when different types of boxes were produced and used, please let me know in the comments field. 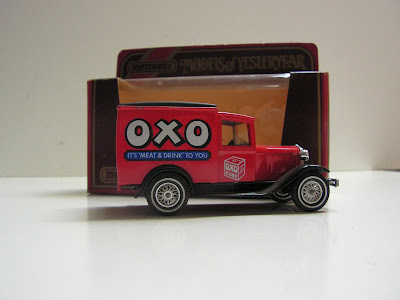 This model spent some time on display back in the 80's, with a fleet of other Yesteryear companions, then went back into his box for the last 15 or so years. Now the time has come to let him find a new home - so I have listed him in Ebay at my Ebay shop 'Capital Diecast Garage '. 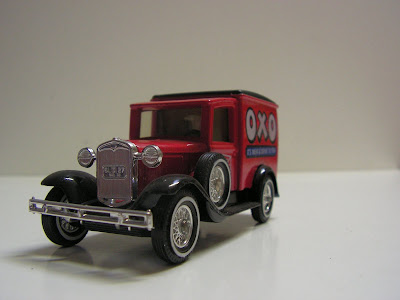 The detail on this model is not stunning, but it is an early 1980's model and compared to the Caldecott 1/43 XY Falcon Utility I bought three weeks ago (reviewed on my other blog ) it is pretty good. I would have paid 12 or 13 dollars for it, but am selling him at half that price.

It is a hard thing to let go of old friends like this, but I am redefining my diecast collection and focussing on different areas, and I would never display him again. Better to set him free.