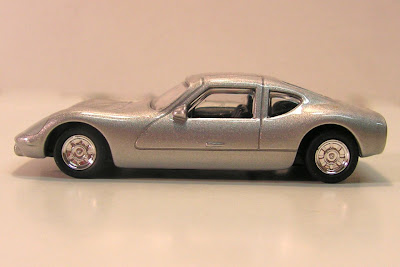 As a collector of eastern bloc diecast cars Im always looking for new cars. I discovered a brand of cars several years ago coming out of Germany that were producing a large range of East German and iron curtain era cars. The brand was 'Grell'. They appeared to only sell cars in Germany and largely through bottle shops and the tourist trade. 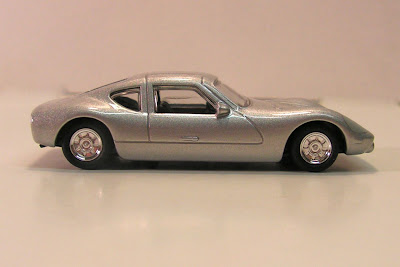 The cars are diecast and in the 'three inch' or 1/64 scale range, although not always strictly to scale. The examples I have seen appear to be made in China by 'High Speed'. Id prefer commie made models, but as the rest of the world has shifted model car production to China, its not surprising that any new model of eastern bloc cars would come from there. The Grell range appears to be new designed models of iron curtain era cars and is pretty wide including Wartburgs, Tatras etc and trucks as well as cars. 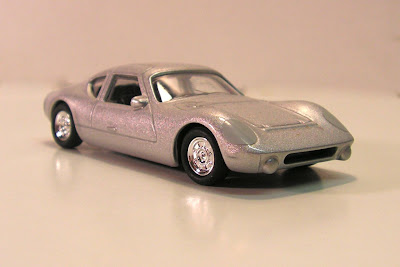 One of my favourite Grell cars is the car featured here today, the 'Melkus'. Im not sure if the car is the Melkus RS 1000 or the Melkus RS 1600. The blister card is fairly scant with that info, and is in German, a language I cant read. As the only real difference is the engine size -both engines being retuned Wartburg engines it doesn't really matter. 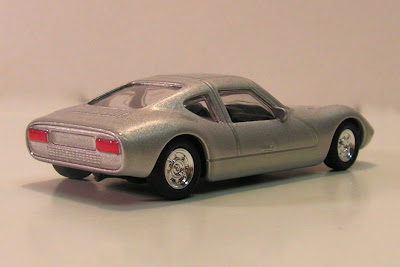 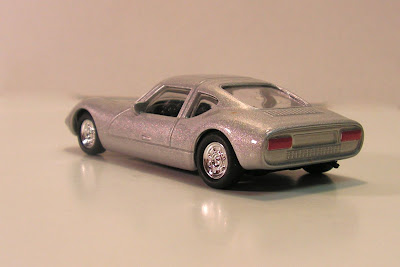 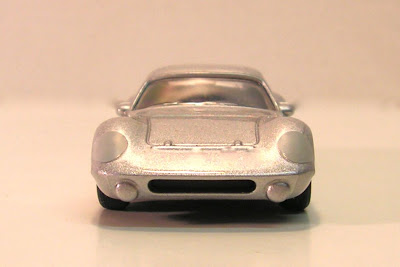 Why? Because the real attraction to this car is that it is referred to as the 'Ferrari of the East'. Its curvy fibreglass body was designed in the late 60's and took all the styling cues of the era, mostly from the West. The sleek looks and low slung design also featured a pair of gullwing doors. Sadly, being located in Dresden saw the Melkus RS production run limited to only 101 cars from 1969 to 1979. 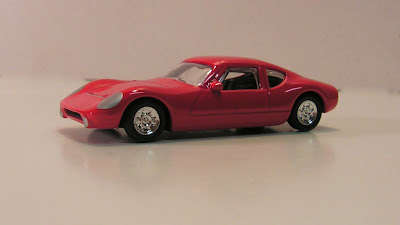 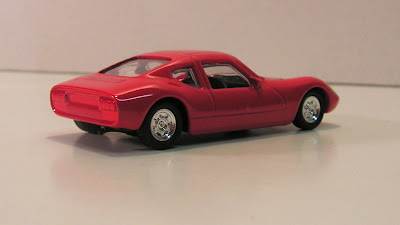 The little Grell car is a very nice model. I have only seen it in two colours, red and silver, but there may be others. I'm not aware of any other models of the Melkus in any scale, so it is an attractive car for the collection based on that fact alone. Detail on the casting is fairly limited. Its not a complex shape to model, but sadly the doors don't open in a gullwing style. The front and rear lights are picked out with a nice tampo paint, but even on the real car external detail was sparse.

The high chrome wheels are probably out of place, but as its a toy car, that can be excused. There is also a lack of any interior detail. The exterior paint is very good with no blemishes. 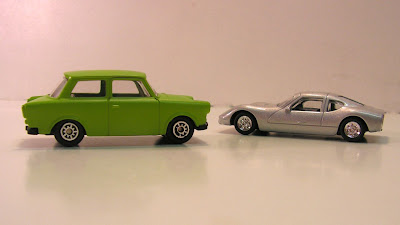 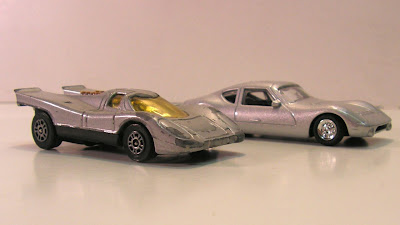 Contemporary cousins from each side of the German Iron Curtain - Corgi Porsche 917 and Grell Melkus RS 1000
Getting hold of the Melkus models was a challenge. Sadly ebay was my only choice and due to German Ebay rules nothing out of that country is cheap. Expect to pay at least 40 dollars for postage of a parcel containing only a few cars. The models themselves are fairly cheap, I didn't pay more than two or three euros per car. 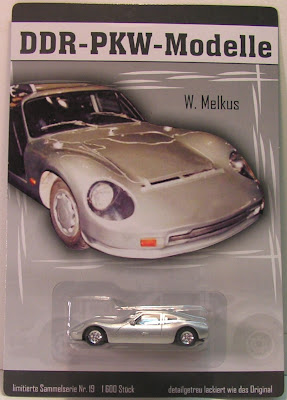 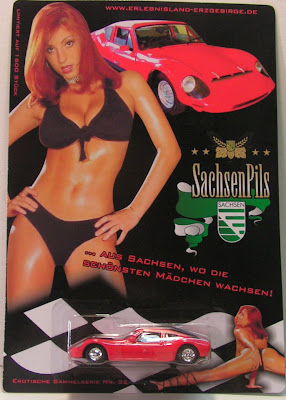 One of the other surprises was the packaging. I didn't see the packaging until after the cars arrived. As Grell cars are given away at bottle shops as part of liquor promotions, some of the packaging is quite garish. I had to look twice at the packaging for the red Melkus RS1000 to be sure i wasn't seeing what I thought I was seeing! The cars sold at tourist stores appear to be a little less exciting in their packaging. Melkus RS 1000
These Grell Melkus cars are nice little models. Its a rare car and unusual as well. It displays well on the shelf and complements the other fibreglass sports cars of the era.
Id like to find out more about the Grell company and its range of diecast cars. If you can help me out please contact me.
To the rating:
Grell Melkus RS1000