Its 1993 and I'm sitting in my semi-detached in Cricklewood, listening to the BBC and munching as many bowls of Corn Flakes as possible. Why? Because Im trying to collect the tokens from the boxes so that I can mail away for the Kelloggs land Speed Legends set of 4 diecast cars! Mum - more cornflakes NOW!

No, thats not true, I made it up, however if I had been in the UK in 1993 it would have been true - because that was the year that Lledo and Kelloggs joined in a promotion that offered four nicely detailed historic land speed record cars. You the diecast collector and corn flake gobbler, had to send in 9 tokens plus 20p each, for the set of four models made by Lledo.

For your reasonable investment, you received a set of four cars and a package of information on Land Speed record breaking cars, including a foldout poster with a nicely printed and detailed timeline. 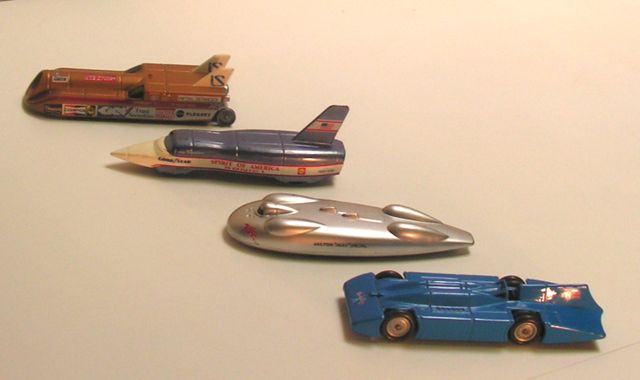 The four cars were:


I will look at each car in detail, then have a look at the different types of packaging that these cars came in. This review is in reverse date order to the cars land speed record breaking runs, although I will list the Lledo model number (even though these reviews are not in model number order)

PM112T 'Thrust 2' 1983 driven by Richard Noble. This model is approximately 1:80. It is a straightforward model to produce with no complex curves or design quirks to challenge the toolmaker. 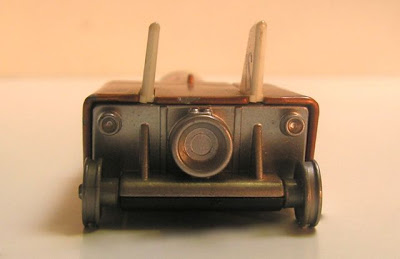 This view shows the clean casting and unique look. The car does not use tyres, and the model captures this. Even though its not a toy, it does roll cleanly on my desk.

The base is fairly sparse with some manufacturer information.

Paint and finish is excellent. No blemishes and the decals are still in good condition 18 years after the model was made. The paint colour is reminiscent of the original XR GT's. Compare teh amount o advertising on this with the Blue Bird and Railton cars. 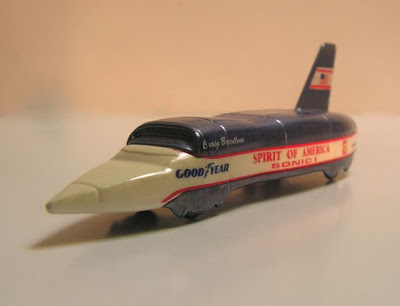 PM109S "Spirit of America - Sonic 1" 1965 driven by Craig Breedlove is approximately 1:100 scale. Another straightforward design challenge for the diecast toolmaker, and the model appears to be accurate. 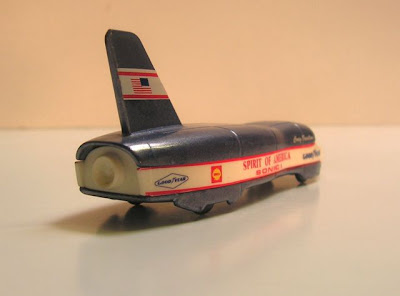 The paint and decals for this model are nicely presented, and blemish free. In this scale, detail is good. Perhaps the join lines on the nosecone and body sections are a little heavy, but the model doesn't suffer in its visual appeal for this.

The baseplate is fairly plain.
A nice model which accurately represents its subject. The colour scheme doesn't set the world on fire, but thats not Lledos fault. The little Shell and Goodyear logos have been printed very cleanly.
The rating for this model:
Lledo Land Speed Legend PM109S 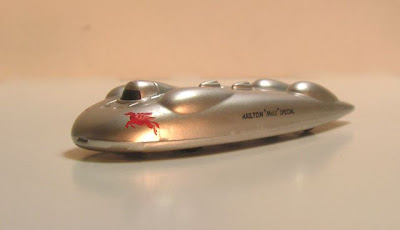 PM110R "Railton Mobil Special" 1947 driven by John Cobb is approximately 1:87 scale. This model is more challenging for a model maker, and I think Lledo have produced an outstanding little diecast car.

The striking silver finish and sparse colour scheme is very attractive. The paint and decals are blemish free. 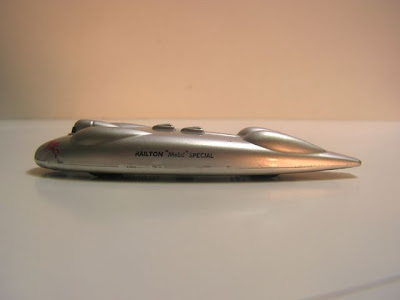 A very plain base plate, with only sparse information.
This car is a beautiful model and Lledo did a fine job.  The immediate post-war aerodynamics were very influential on later land speed record attempts. The sparse paint scheme - a striking silver with a flying Mobil horse and the name of the car and driver, over a beautiful flowing body - make this a very nice looking model.

This was the last car with a piston engine to hold the land speed record. It broke the record at 394.20 mph although it did break 400 mph on one of its runs, but not both ways. This was in 1947. All records since then have been in cars with non-driven wheels and using rockets and jets etc. An important model for diecast land speed record collectors.

PM111B "Blue Bird" 1931 driven by Sir Malcolm Campbell, approximately 1:80 scale. This car is the pick of the four Lledo land speed legend cars. It is a beautiful representation of the original Campbell-Railton Blue Bird and has been accurately rendered by Lledos model makers. 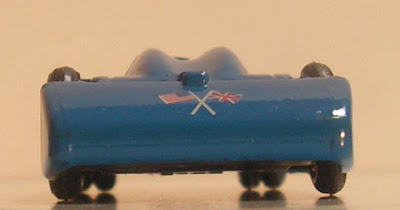 The paint and finish on this model is first class. In this scale the detail is very good, with the drivers cockpit and wheel centres nicely represented. 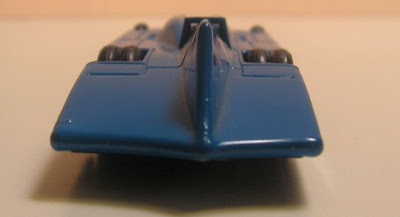 No matter what angle you look at it, this is a beautiful little model. This is of course due largely to the original designers of the car back in 1932.

The baseplate is typically sparse, the same as the other three cars in this set. 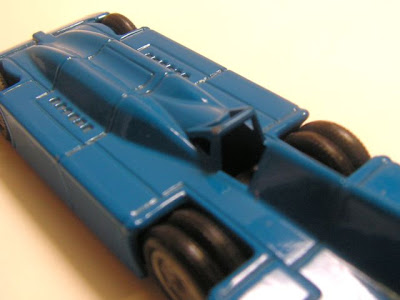 This is one of my favourite diecast cars. The real car broke the magical 300 mph barrier to travel at 301.129 mph in 1935. Lledo did a great job on this car, and it deserves a place in your collection.

Quality  7
Design    9
Colours   8
X-factor  9
Rating: 33/40
Packaging of Lledo Land Speed Legends models
As a cereal promotion, these cars were sent out in two ways. One was in individual boxes, if you only sent in the tokens for one of the cars, that was what you received. The other way was in a box with four other boxes inside, with a car in each of these boxes. If you received the four car set, you also received a package with a large foldout poster with information and illustrations of the history of land speed records.
The cars were also available individually in window boxes, but lacking the elaborate Kellogs promotion foldout posters. The window boxes were identical with only the car inside changing.
The Thrust 2 model was also available in a unique box from the Museum of Transport in Coventry. 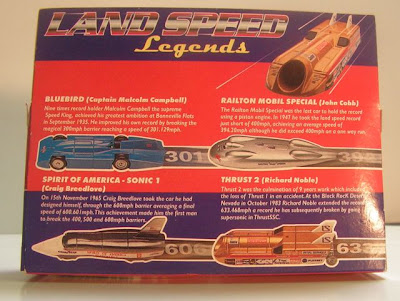 The same window box was used for all models in this series. 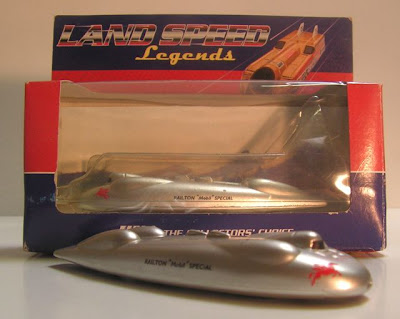 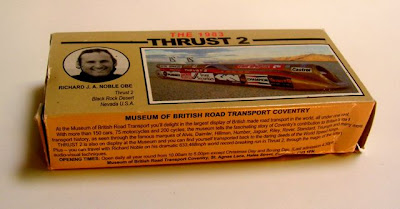 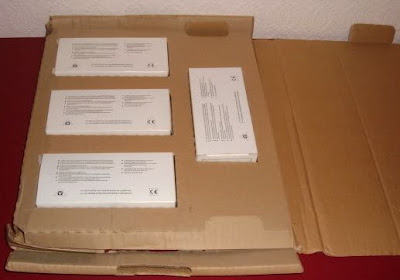 The foldouts from the bonus package that came with the four car set.

Note - I do not own these foldouts and took these images from an Ebay auction.
How to collect this set of cars
I have never seen these cars for sale in Australia. The only way I know to acquire these cars is to look on Ebay and be patient. They are not expensive to collect, although it has taken me over two years to get a boxed example of each car. They are often seen on Ebay UK loose.
It is a truly beautiful little collection of cars, and they look great displayed together.