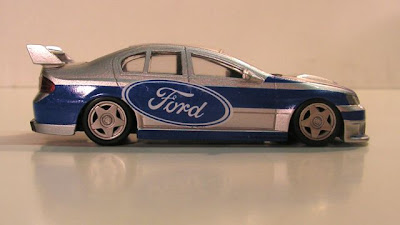 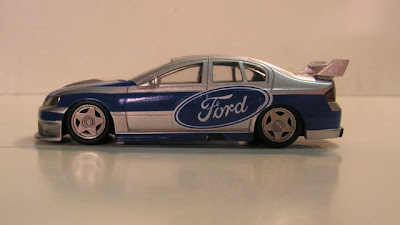 Dinkum Classics were the company that began the modern era of Australian diecast collecting with a wide range of modern Australian cars, all in diecast, with a high degree of accuracy and finish. Sadly, they ceased operating around 2001 for several reasons - including increased competition from Australian companies that had outsourced manufacturing to China, but the main reason was a fire that destroyed the moulds Dinkum used to produce their models.  I am researching Dinkum and will post a more indepth article when that research is complete. 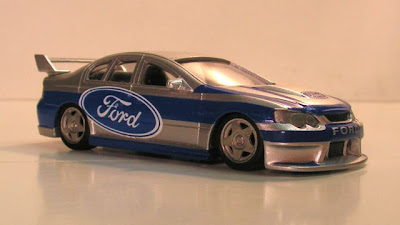 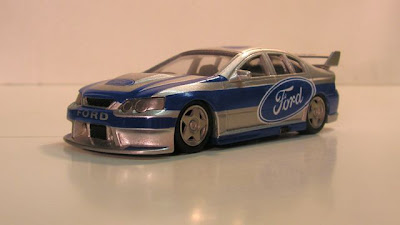 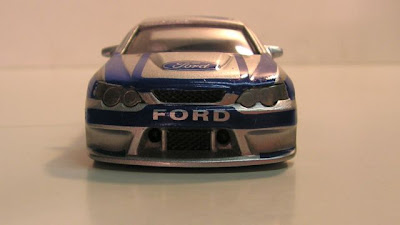 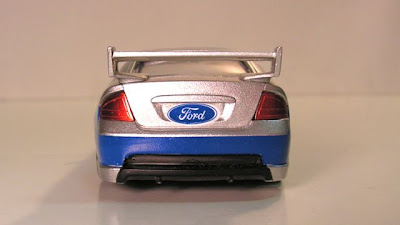 This is a very attractive model and has been reproduced fairly accurately, with a striking colour scheme. The wheels are fairly accurate for racing vehicles, and the model has an accurate racing stance, although there is no negative camber on the front wheels! Curiously the front headlights are diecast, not clear plastic, which would make sense as most racing teams use the headlights for advertising/sponsor purposes. 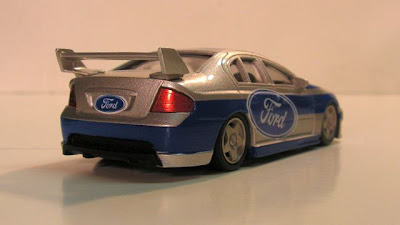 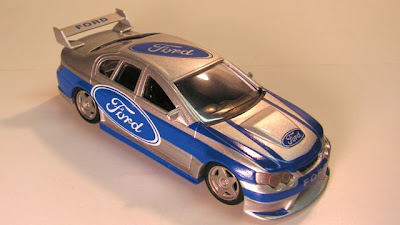 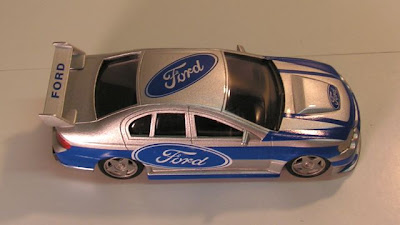 Im not sure from which angle this car is best viewed! The distinctive BA bonnet bulge, which is becoming as iconic as the XB bonnet nostrils, look great from the front, but the satin silver and blue colour scheme and bold Ford signage makes it enjoyable (for a Ford fan) from many angles. The grille is also nicely moulded and representative of performance Falcons. 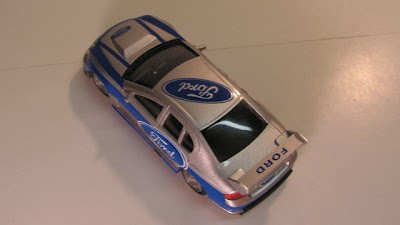 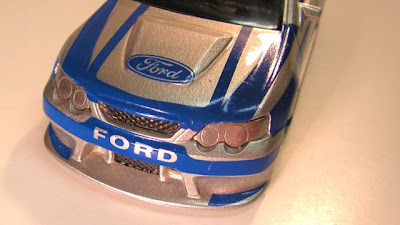 There are a few problems however, the glass is flimsy and not robust like Biante/Trax model glass. It is more like the moulded clear plastic you get in a resin kit. It also doesnt fit that well, if you look closely. The rear door, and that heavy treatment of the door channel between the two panes also looks a little out of scale. Small quibbles I know, so lets look at a few more positives - the interior is clearly specific for a racing car and not a road car, with a single moulded racing seat inside, sadly the tint on the glass makes the interior difficult to view in a photo. No rollcage inside though, Dinkum weren't at the level that Biante are today. 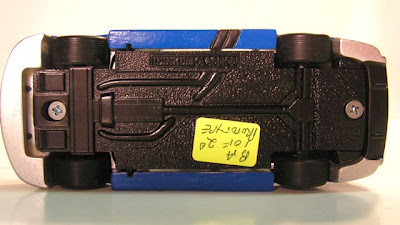 Flipping it over you can see that the base plate is very basic, but the wheels are nice and wide, and the racing exhaust is also moulded in. Typical of the era in diecast models. The handwritten sticker is a nice touch from a small company. When new this model cost $130 and I do not know what the current value of it could be. Many Dinkums are listed at high 'Buy It Now' prices on Ebay, but they stay there for a long time.  The person who I bought this from, who had many Dinkums, tells me this is 1 of only 2 produced. I do know from talking to people close to Dinkum manufacturing, that although many runs were claimed to be limited to 99, as few as 20 could be made, sometimes less. So is this 1 of 2 made or 1 of 20 ? In either case - its a rare model. 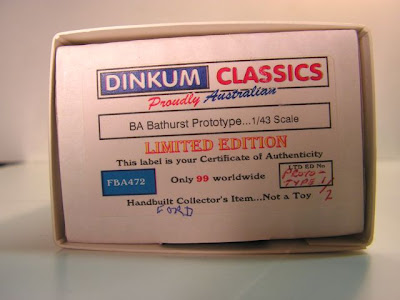 Packaging is very basic, a cardboard box with a white cardboard slipover. The car itself is wrapped in a tissue, then bubblewrap. Safe and secure but nowhere near the level of presentation that a car in a little clear plastic box arrives in. I dont  think it matters though, at least its not secured with infernal wires! I do recall the thrill I had when carefully unwrapping the bubblewrap and tissue - so maybe some Steve Jobs style packaging psychology was used.
This model is very nice, and will stay in my collection. Its scarcity and striking looks secure its place.
To the rating:
Dinkum Classics FBA472 - BA Bathurst Prototype