Last year I published the history of the Leyland P76 in diecast and resin, in the P76 national magazine, published to coincide with the Leyland Clubs National meets every two years. I thought I had delivered a pretty comprehensive history and was satisfied that I had done my research. So imagine my surprise - pleasant surprise - when I received an email from Ged Fitzsimmons just before Xmas last year, informing me that I had overlooked his role in the Dinkum Classics Leyland P76. The Dinkum P76 was the next car to come out as a Fimcar before Ged threw the towel in and sold the moulds to Mike Stack of Dinkum Classics. I will cover this in an in-depth article for the Leyland magazine in the very near future. 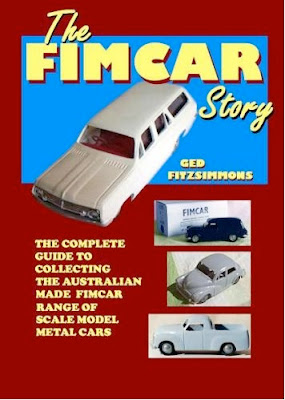 Ged also told me in his email, that he had just published a book 'The Fimcar Story' with info on the P76 and all the other Fimcar models. I could hardly wait to get back to Canberra and meet him, and read his book. I did this last month, and will publish an interview with Ged soon.
'The Fimcar Story' is an excellent read, and you will find out a lot about the diecast scene in the 80's, early Australian diecasts - especially of Holdens - and a complete soul baring description of success and failure in the diecast trade, told in a very readable way. 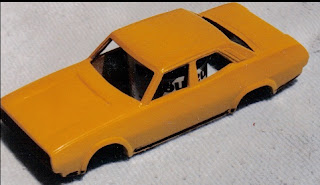 The 'master' metal casting of the 1/43 Leyland P76 that was meant to be a Fimcar, but became the Dinkum Classics Leyland P76.
The book is a must read for anyone who is a collector of Australian model diecast cars. Ged was heavily involved in the diecast collecting scene in the 80's and into the 90's. He and his wife ran a business called 20th Century Models, buying and selling diecast cars. Later on he also ran the Sherrifs Mini-Cars diecast car shop in Canberra from 1992 to 1995. But at one point - he also decided to make and sell his own diecast white metal 1/43 scale cars - which he branded as Fimcars! Short for Fitzsimmons Model Cars.
Like his life, the book is really divided into several parts. It begins with a short rundown of Ged's life, including the fact that he was born right across the road from a Dinky subsidiary factory in England! His family migrated to Australia and later became involved in collecting and selling obsolete toy cars.

The first main part of the book then focuses on Holden toys and models from different manufacturers from the 50's through to the 70's. I found out more about these early miniatures from this book than I knew before. This alone makes the book a worthwhile purchase, especially if you are a collector of Holden diecast cars. 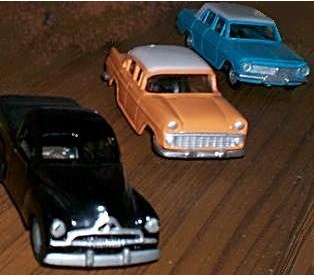 The rest of the book then examines the process of creating and marketing model after model, and the difficulties that small businessmen face, especially when they tackle something that is a bit different and a lot harder than it appears. The final part of the book lists all Fimcar models, colour variations and production numbers and even shows some fake Fimcars (which Ged sort of regards as a compliment, while not happy about it at the same time, and reckons he knows who is responsible...). There are plenty of illustrations throughout the book, with clear photos of all Fimcar models produced.

After reading Geds book, I can see why models of Australian cars are now made overseas. It is a combination of costs, rising quality and production volume. The Fimcars were in their day equal to other hand-built models available, but they were priced at a premium (and even then, it barely covered his costs) and compared to the quality and accuracy of a diecast car you could buy today from Biante, Trax or Classic Carlectables - it is doubtful that a small volume production run like Fimcar could ever compete. Fimcars were made using a form of diecast metal, remember - not resin. Ged discusses this with a reflective look at early Trax cars when John Easie was behind that innovative company. This book is as much a history of early Australian toy/model industry and personalities, as it is a Fimcar history. 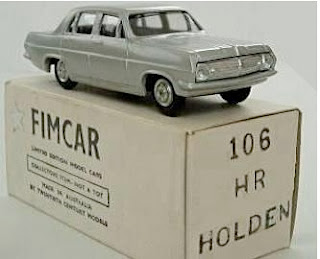 1/43 scale Fimcar HR Holden sedan, Fimcar also made a 1/43 scale HR Station Wagon
Ged has been quite entrepreneurial with this book, he wrote it, edited and self-published the book. You can buy it from him directly or through eBay. He also made a video with more photos from the book and placed it on YouTube! The book costs $45 (free postage in Australia) and I recommend it to all serious collectors of Australian motoring toys and diecast models. Even if you have no interest in Fimcars themselves, the first part of the book, some 30 pages or so,  on early Holden model diecasts is worth the price.
Contact Ged at g_fitzsimmons@bigpond.com to buy this book.
Posted by D.C. Haas at 9:07 PM