Into the Garage - VW 181 - Matchbox and Hot Wheels compete 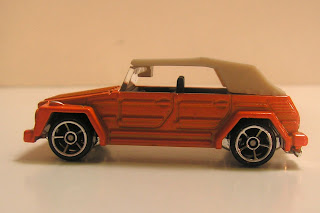 For Volkswagen fans, both matchbox and Hot Wheels have put out type 181 'Things' in their 2009 ranges. Oddly, they have not only released new castings but also released them in teh same colour - a bright orange. I decided to compare the two models and look at each companies approach to their cars and their market.

According to Wikipedia: the Volkswagen Type 181 "Kurierwagen", popularly known in the UK as the Trekker, in the US as the Thing, and in Mexico as the Safari, was a small military vehicle produced by Volkswagen from 1969 to 1983, although civilian sales stopped in 1980. It was based in part on Volkswagen's Type 1 (Beetle), and was a continuation and improvement over the Kübelwagen, which had been used by the German military during WW II. The name Kübelwagen is an abbreviation of Kübelsitzwagen, meaning "bucket-seat car". 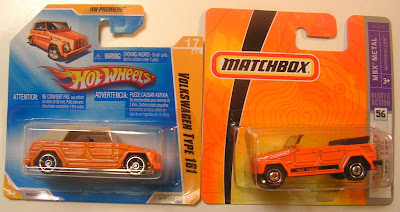 Packaging for the two cars is similar, with the Hot Wheels short carded version on the left. Both cars retail for about $2.20 Australian. Lets remove the cars from their little plastic bubbles and take a look at the Hot Wheels version first.

The Hot Wheels Volkswagen 181 appeared in the 2009 lineup as a Hot Wheels Premiere. Its number is 17 42. It was designed by Jun Imai. There are three colours and one variant. The colours are orange with tan roof, blue with black roof and tan with black roof. The blue black version is known to appear with different wheels. 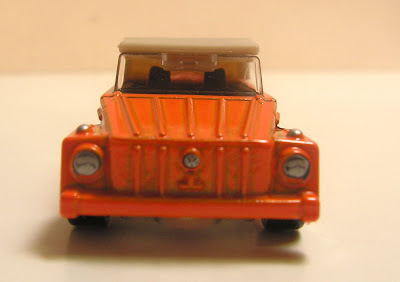 Although it is a nice looking model, i immediately noticed some paint problems. In this shot you can see some of the paint issues. I have this model in blue metallic and it does not feature the same issues. Thinking it was a one off I bought another from a different store, but it also has paint issues. 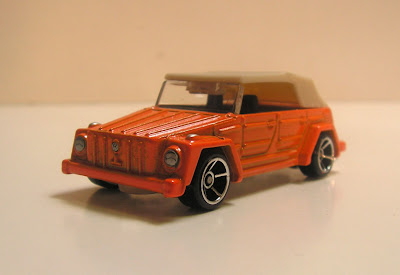 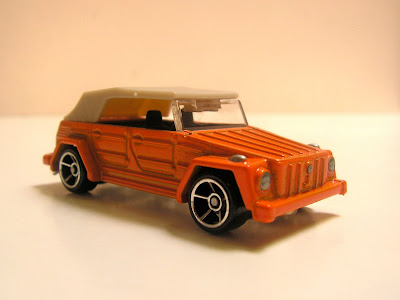 Much lower than the Matchbox version, with blingy rims. 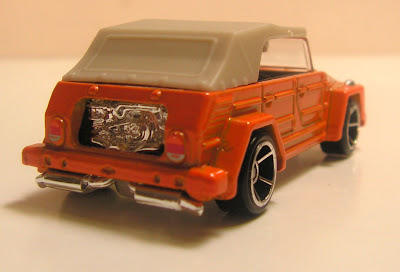 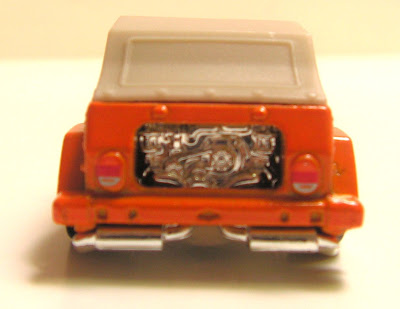 This is a typical Hot Wheels touch. Although it isnt blown, and relatively stock for a Hot Wheels, the chromed engine and lack of engine cover is clever.

The baseplate has some differences between the cars I have. This one shows B17 cast in, other baseplates have different letter number combos. 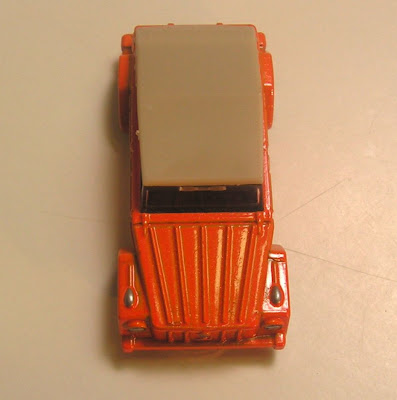 Overall the Hot Wheels VW181 is a nice little car. In orange, the paint could be applied better, perhaps primer could be used under a bright paint. The metallic blue version does not suffer from the same paint issues, but is scarcer.  I have not seen the tan black version in Australia.

Let us know look at the Matchbox version. 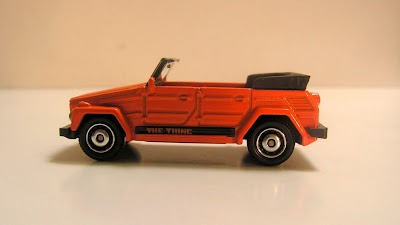 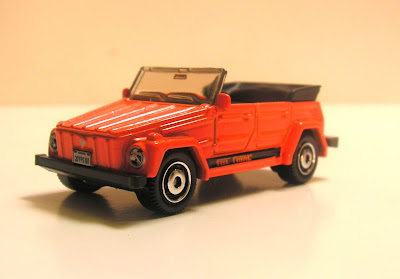 It is immediately apparent that the Matchbox version is more of a replica of the real car, than a Hot Wheels caricature. Certainly model makers need to take some artistic licence when representing cars, but accuracy is also important. 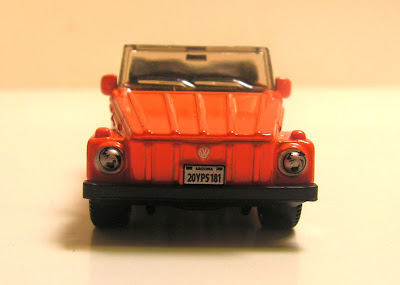 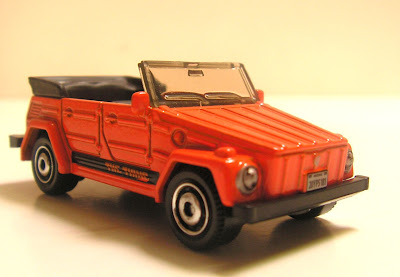 Californian numberplate is a nice touch and may very well be based on the reference vehicle. 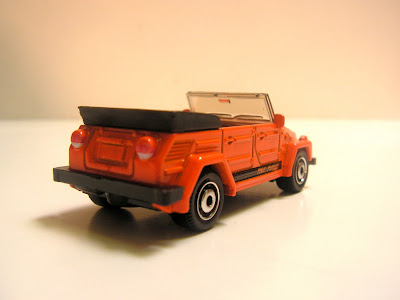 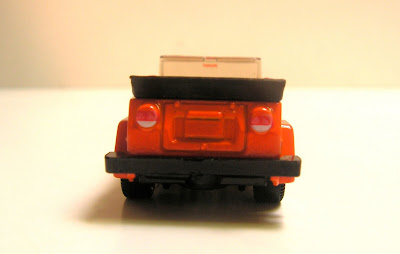 No paint issues with the Matchbox version. It is a darker orange than Hot Wheels. 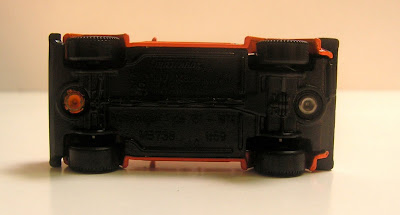 Plastic baseplate with bumpers cast in.

Next to each other the similarities are more obvious than the differences. The body shape is similar to both cars. They are approximately the same scale, which i guess at 1:87 scale. The front fenders are different on each model. Naturally the Hot Wheels rides a bit lower. 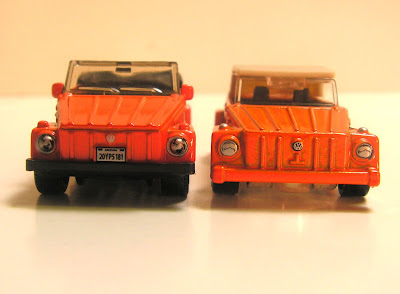 Now the differences can be seen. The Hot Wheels bumper is lower to exaggerate the low stance. It also has a body painted bumper. On the Matchbox version, the bumper is cast into the black plastic baseplate. 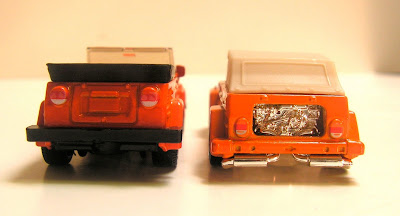 Hotwheels have cast the chrome custom exhaust into their baseplate. each company clearly have used a different variant as a reference car, which can be seen by the different positioning of the tail lights.

Although the Hot Wheels is lower, the Matchbox version is wider. It also has door mirrors. 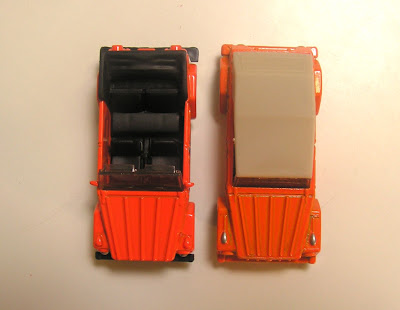 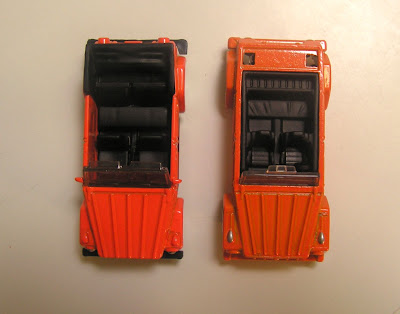 Both models are very nice little cars. I prefer the Matchbox version as it is more accurate, and is less blingy than the Hot Wheels version. I dont think the wheels suit the Hot Wheels version at all. No doubt now that it has appeared in each companies line, it will be recoloured and restickered for years to come. I dont know whether it was accident or design that a VW 181 appeared in each line almost simultaneously, but it does give one an opportunity to compare the different approaches each company has to its market.