Dales Cars - Exhibition at Canberra Museum and Gallery - Part One

At the Canberra Museum and Gallery there is an exhibit of a local diecast vehicle collector 'Dales' collection of diecast cars. It is running until 7 February. I visited it yesterday and was amazed at the excellent presentation and placement of the cars. It was simply stunning. I took quite a few photos, so I will split this over two posts. I had to use my camera phone, so the photos arent doing the cars justice. Go and visit it yourself. 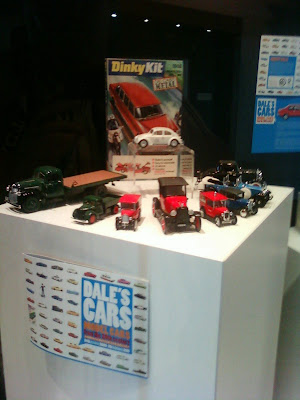 The display is in two parts, one at the front door to the CMAG, and the second main part in the CMAG proper. This is in the entrance. 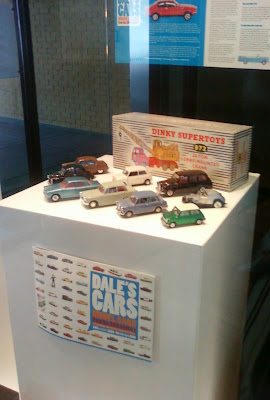 A nice brochure has been prepared for the exhibition, thats it stapled to the white plinth. Photography is superb. They may have used an actual camera, as opposed to the phone in their pocket. 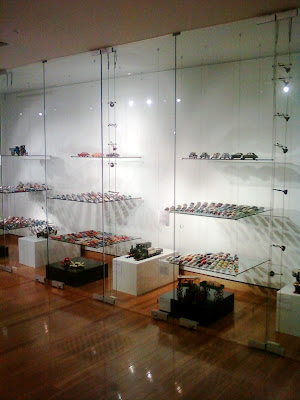 When you arrive in the CMAG gallery area, you walk up to the small display area. Yes, those glass shelves hold tiny cars. They are behind glass doors. 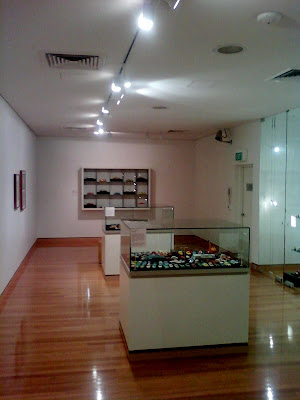 Large central cases also have tiny cars displayed in them. One case is devoted to USSR made 1/43 cars. The bulk of the collection is cars from 1950's to the late 1970's primarily British and Australian cars. 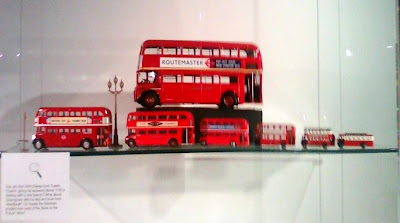 This photo is a bit blurred, but this is a nice collection of Routemaster buses in various scales. 90 percent of the collection would be in 1/43. 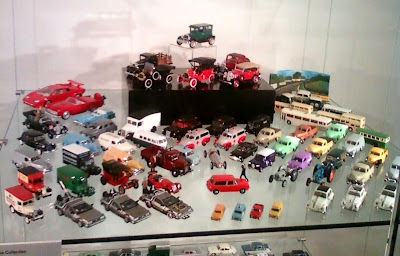 Whoever set these out had a keen eye. Nice triple pairings of DeLoreans and Herbie Lovebugs. Yes thats John Cleese/Basil Fawlty thrashing a recalcitrant car. Dale has some interesting collection sub-sets in his main collection. In the CMAG display area, they are grouped under 'miscellaneaous'. 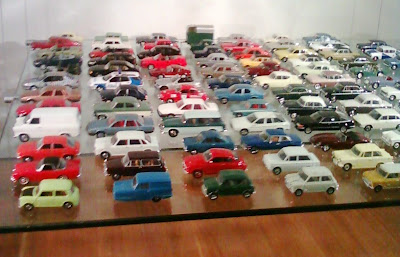 An assembly of primarily British cars. 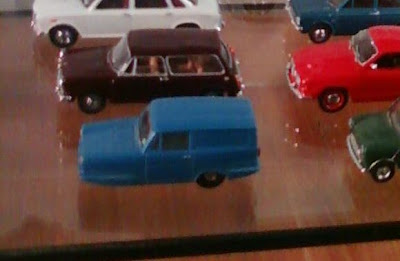 I believe this is from a Dinky two-pack with Mr Beans Mini. This is the Reliant Robin nemesis that featured in several Mr Bean episodes. 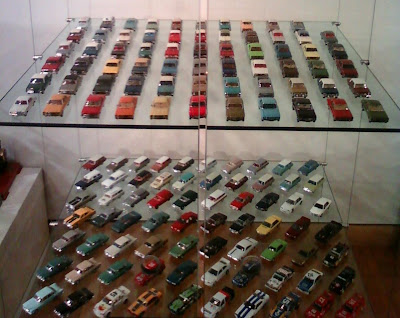 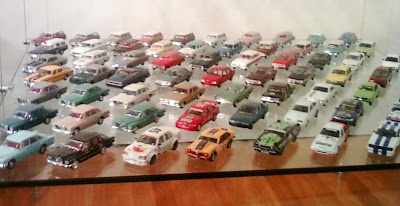 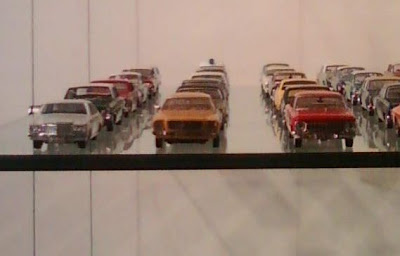 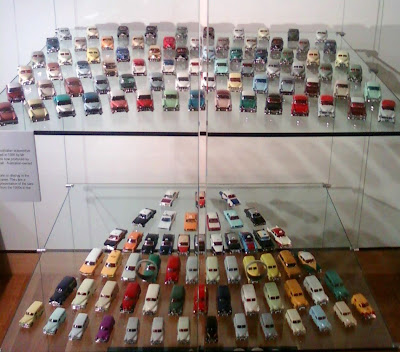 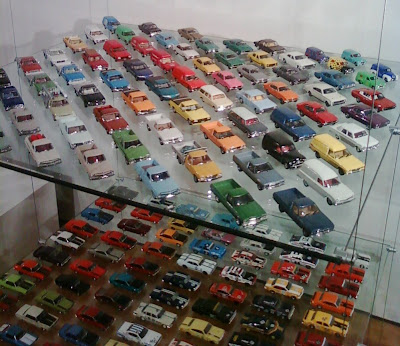 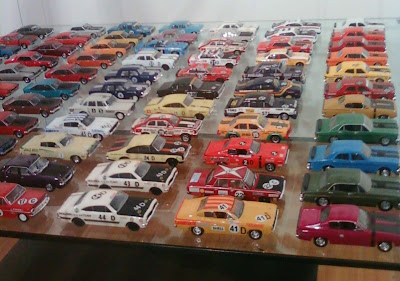 My collection seems woefully inadequate compared to Dales. His pockets must be deep! 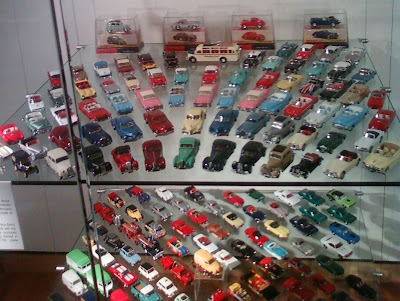 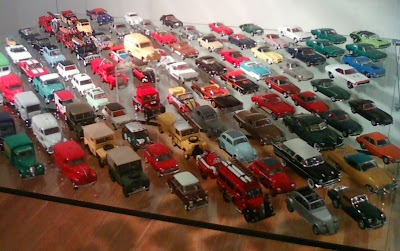 More Matchbox/Dinkys - mainly the later ones. 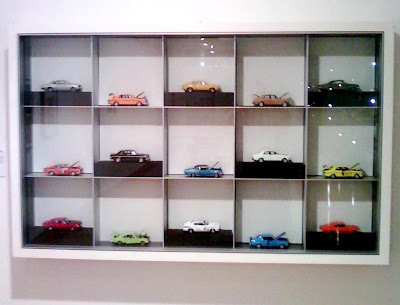 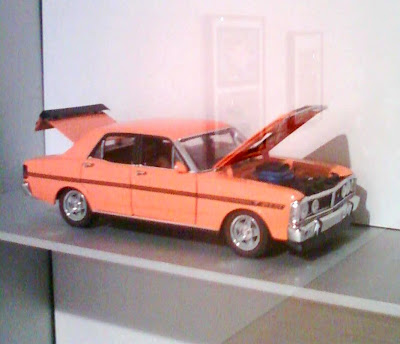 Nice Falcon. Looks better when not photographed by my phone. 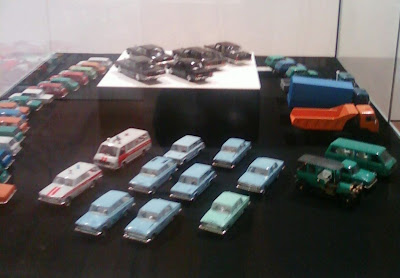 Interesting sub-collection of Russian cars. In the centre are Russian limousines. 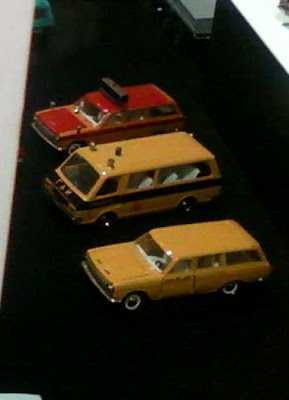 Not too many people in Oz would have a collection of Russian cars, not just the glamorous ones, but ordinary vehicles also.

According to the brochure, Dale started collecting when he was a child, mainly Dinkys that his father gave him. The bug rebit him in 1992 when he bought some of the new Dinkys and discovered his old Dinkys were now worth quite a bit.