Into the Garage - I'm Excited! Big Kev Racing Commodore in 1/43

Anyone who attended the Canberra GMC-400 V8 Supercar races in the early 2000's cant forget the incredible crowd favourite that the Paul Morris Big Kev Racing Commodore was. He may not have featured in the podium results very often, but the car was well presented and he drove well enough to garner respect. Morris is still racing today with Morris Racing known as Supercheap Auto Racing.


I suspect the massive TV campaign for Big Kev cleaning products might have had a part in that. Big Kev or Kevin McQuay was a wideboy showman from Queensland who had a hit with his Goo Remover and ran with the opportunity. He went public and brought a complete line of cleaning products to the market. Then it all started to unravel, and eventually share trading halted and the company went under. Sadly Big Kev passed away shortly after and his company and products are no more. 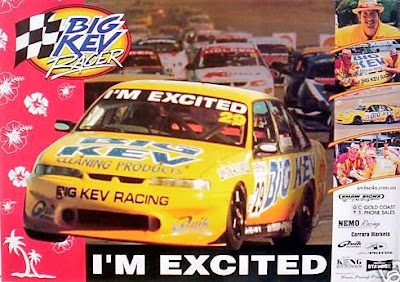 Before that happened though, he sponsored Big Kev Racing and would appear at the races to promote himself, his products and the team. I bought a scarf at one of the GMC 400's (middle of Canberra June) and still have a bottle of Goo remover in the laundry cupboard.


Paul Morris is a talented aggressive race driver. in 2000 he was involved in a major start-line accident at Oran Park suffering a number of fractured vertebrae , and narrowly escaped being burnt alive in flaming wreckage of his VS Commodore. He recovered without missing any races, and garnered his first win at Calder Park in 2001, where he won two of the three races and the round overall. 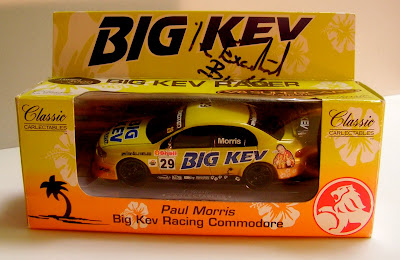 I saw this model on Ebay and it had no bidders. I picked it up very cheaply. Its a mass produced Classic Carlectable 1/43 diecast with a plastic base and no interior. The window glass is in fact glossy black plastic. Its one step up from the toy category. But it is a nice representation of this model Commodore, and the Big Kev Livery is vivid. Added to that is the signature of Big Kev himself. I made one bid and it was mine. 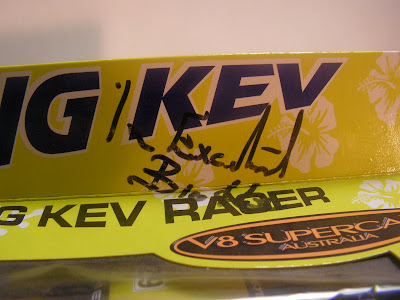 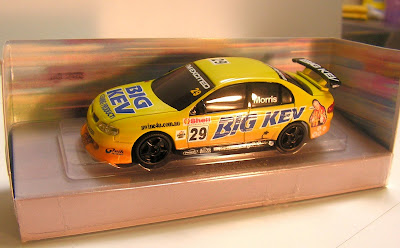 Packaging is supermarket hanger style, and fairly flimsy. There is a screw underneath holding the model down, and a certificate of authenticity. There are 2999 other Big Kev Racing 1/43 Commodores out there somewhere. 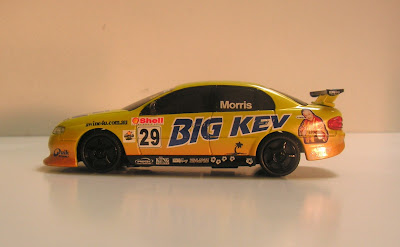 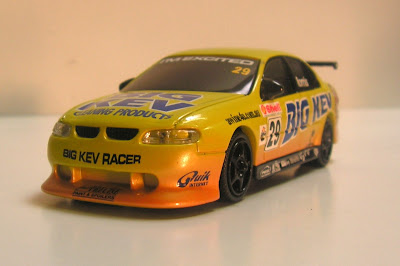 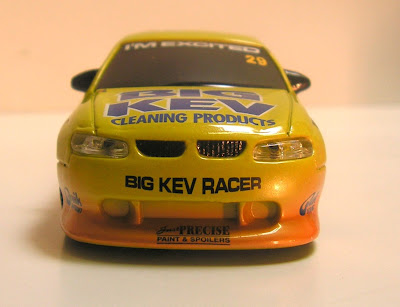 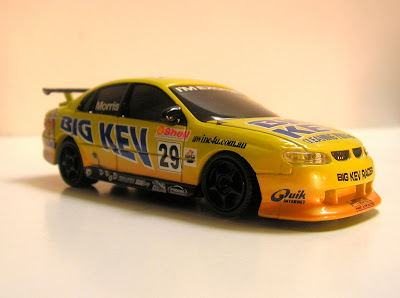 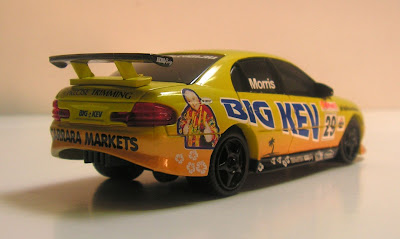 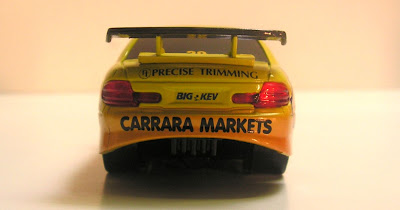 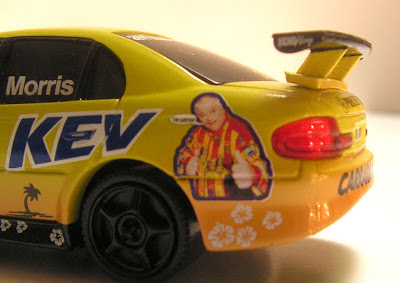 Big Kev himself. He was renowned for his lurid shirts and vaudeville style showmanship.

So to the all important rating. Considering its a mass produced fan model, its not of the quality that collectors of diecast normally look for. Having said that, it is eyecatching, and as a person who was standing at the corner in Barton when Morris spun out and was cheered on by the crowds, this is an emotional purchase as well. 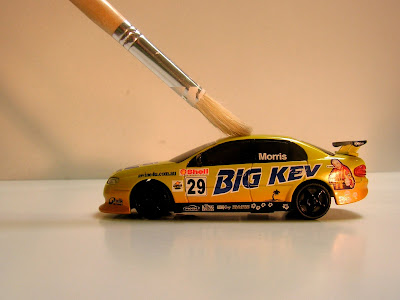 Getting the model prepared for shooting. Its arduous work.