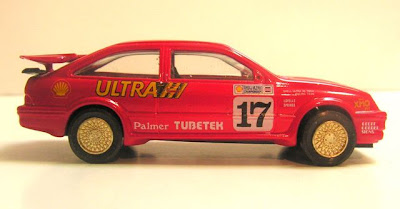 When CAMS decided to do away with the exciting Group C formula, they went for the international Group A formula, intending to internationalise and expand the Australian racing scene. It didnt really work. No local cars were really up to scratch when Group A was first introduced, and it took several seasons for the Group A Holden Commodores to become competitive.

The Ford Falcon simply had no chance. From driving one of the most exciting Group C cars ever fielded, to non-competitive overnight. It was hard for the Ford drivers. Dick Johnson, at that time one of Fords most iconic drivers, switched to the Ford Mustang, running a 5.0 litre V8, but it struggled to be competitive.  In 1987 and 1988, he switched to the turbocharged Ford RS Sierra.  Some drivers switched to other manufacturers such as BMW. In the Sierra, Johnson won the 1988 ATCC with six race victories. 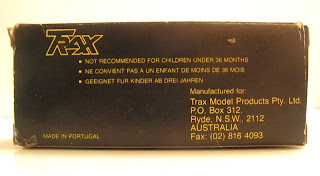 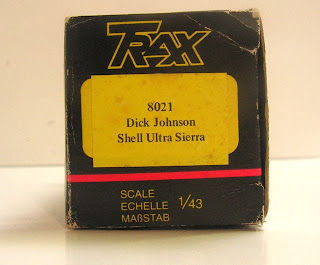 Trax dont bring out many contemporary race cars any more. That market is now dominated by Biante and Classic Carlectables. But they did bring out this car back in the day with the famous no 17 on the side, in 1:43 scale. Unusually for Trax, this was not designed in Australia and manufactured in China. This model was manufactured in Portugal by a company called Trufoe.  Trax confirm this is the only model that they have had designed by an outside company. Made in several different racing liveries, the model is not commonly seen and was not as I understand enormously popular. Dinkum also produced a version of this car in 1:43. Biante have a version of this car in 1:18 which is very nice. 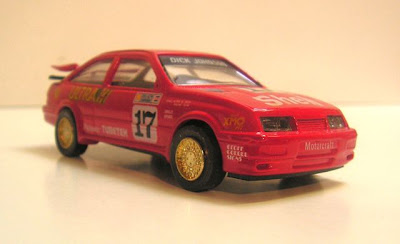 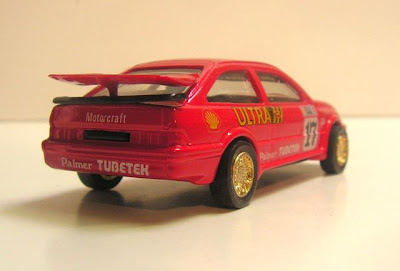 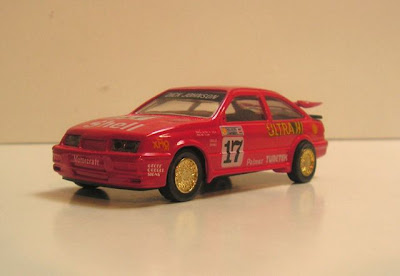 The RS Sierra model is fairly average, even for the time. It is not overly detailed with simple mouldings representing taillights and grilles, instead of separate pieces. The interior is not detailed at all. This car is really just a simple repaint of a road car, rather than a model of a racing car. 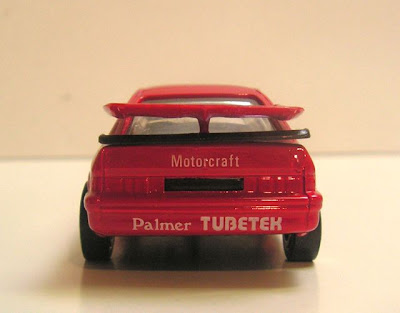 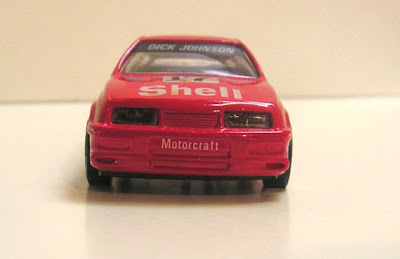 A common problem with this model is the lower rear spoiler. It has come adrift on many, and this is often not mentioned in Ebay listings. Make sure you ask, or look closely at the photos if you intend to buy one.

The 1:43 spoiler is not accurate either, with the black rubber edge of the upper spoiler missing. The clear headlights on this model are also inaccurate, with the real car having red covers with Shell emblems on them, over the headlights. 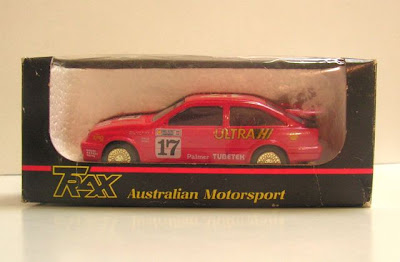 Packaging is very basic, certainly nothing like the quality seen in recent years, at this stage they were still packaged like expensive toys. Often the clear plastic is damaged and torn. I think it is simply deteriorating with time, rather than a sign of neglect though. That is plastic foam on the inside, holding the car in place. This seems to be holding up well. 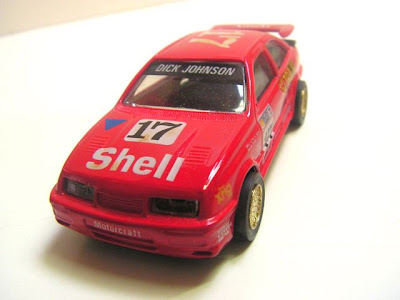 The baseplate is very basic, and the wheels and tyres are more toy like than most Trax models. The real car had Simmons wheels, the Trax wheels do not resemble the Simmons remotely. Paint is uniformly good, better than some early Trax, although this leads to my main concern. My biggest issue with this model is the deterioration on the racing livery paint. You can see on the 'S' and 'h' on the bonnet, and also on the '17' that the white paint is discoloured. This is also due to age and not mis-handling or neglect. I've looked at several, and it is a common problem. Additionally, the racing livery is more representative than accurate, with a lot of the sponsors missing, such as Shell emblems, Palmer Tubetek, Australian Airlines etc.

Now we come to the rating. This is mainly in my collection due to it being a Trax and a Dick Johnson car. I think cars designed by Trax are generally better presented, and this car is more a toy than a model.