Canberra Downhill Diecast Dragracers - Round One

After constructing a Hot Wheels racing track - you need somewhere to race it. As a member of the Canberra Model Vehicle Collectors Club, I decided to take it along to the March meeting and set it up and have at it. Two other people had expressed interest - and I had two cars mailed to me by 'Model40fan' at the Redline Racing Forums. Four people is enough for a competition!

The track laid out and all components joined together.  If you look, you can actually see two little cars that have just exited the starting gate.

There were a few kinks - such as this MAJOR one - and of course, I didn't have a stanley knife to trim it. 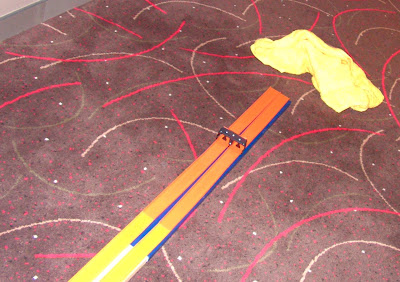 The towel is to catch cars that have exited the track after going through the finish line. You can see here where the vintage track meets the contemporary Hot Wheels track (the pieces on the blue painted plank). 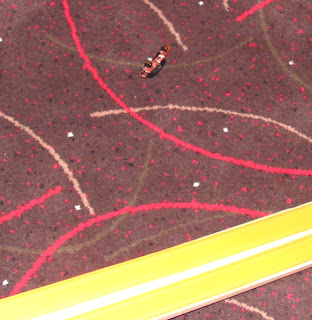 Because of the kinks, including some sections where track joined, a few cars tumbled off the track - such as the Hot Wheels Volkswagen Type 181. It was a fast car - but the track needs some improvements. 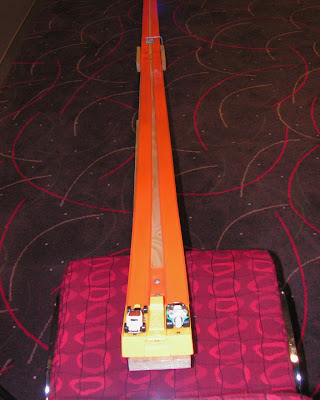 Half Packid (US Import) vs Matchbox 'Tyre Fryer'
One solution on the night was to lower the track a little. I had the track elevated about a metre to start with, but too many cars came off the track, as gravity, a bumpy track etc caused them to exit the tracks... so we lowered the starting gate to chair seat level. This helped considerably. 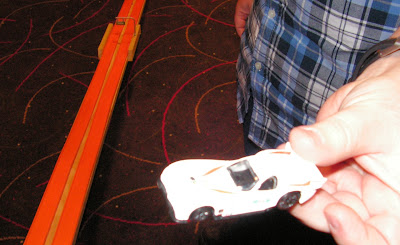 After watching us race, Sam decided to get involved - he had bought along some cars to swap/sell - and came over with this Matchbox Viper. It was pretty quick. 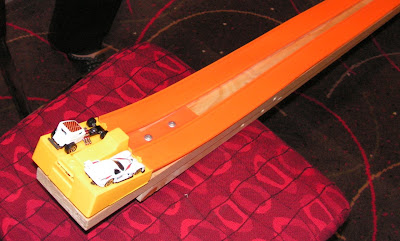 Viper vs Half Packid (US import) 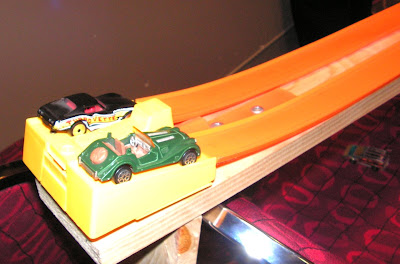 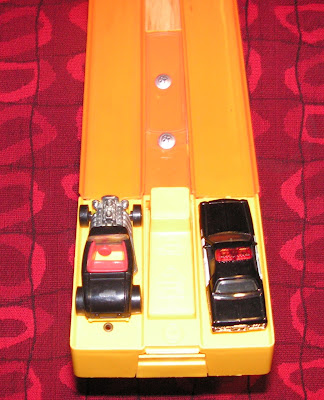 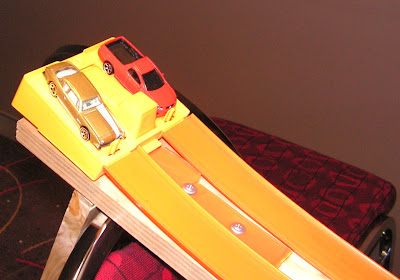 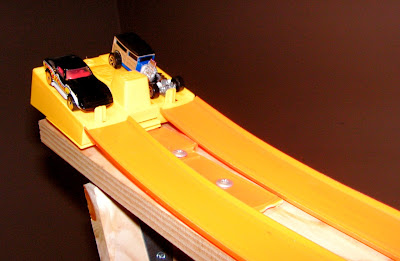 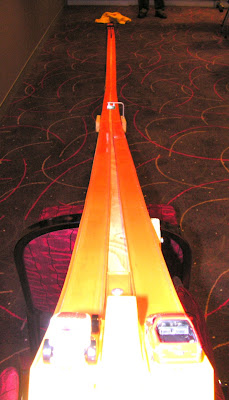 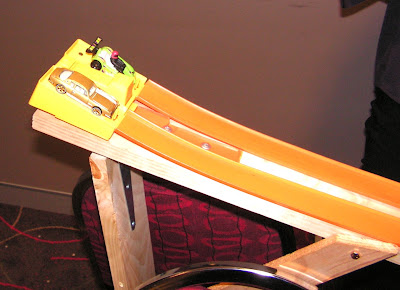 McDonalds Hot Wheels Go Kart vs Hot Wheels Studebaker Avanti.
This is the original configuration of the track, with the starting gate raised just over a metre. The starting angle also seems too steep. The other problem is that although there is one button to start races, some cars seem to 'hang' at the gate and not race away. Advice is sought. 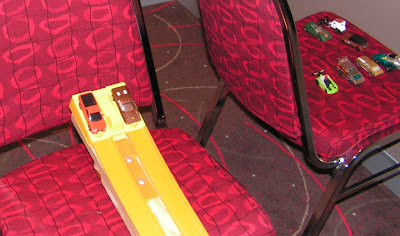 Matchbox Holden Ute vs Matchbox Ferrari Testarossa. Cars are 'staging' off to the right.
Lowering the starting gate and the angle of the track, was a partial solution to the problem with cars tumbling off the track. It still didn't stop some cars flying off when they encountered that large bump in the track. 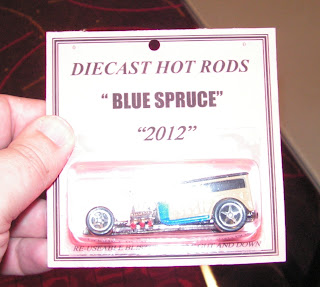 Congrats to Model40fan and the visiting 3 inch sized American contingent!
(the car has a very cool resealable blister and its own printed card!)
Conclusions
Between now and the next race (probably the April meeting of the Canberra Model Vehicle Collectors Club ) I will work on improving the track. If anyone has advice - please post it in the comments section.
Oh - Big thanks to Sue who raced around collecting cars that tumbled off the track and also returned cars back to the starting gate... even after her Corvette exited the comp! It was also her idea to lower the starting gate height!
And if you want to race - let me know!
Posted by D.C. Haas at 9:19 PM

Email ThisBlogThis!Share to TwitterShare to FacebookShare to Pinterest
Labels: 1:64, CMVCC, code 3, diecast racing, why i collect