With the decline of the Matchbox brand, other diecast brands are filling the niche of the non-Hot Wheels 3 inch diecast car segment. Motormax are a brand that have produced cars for 'house labels' in Australian department stores for some time. Target has carried Motormax 5 packs under the Tough Stuff label for at least the last two years, and now Kmart are carrying Motormax cars in their own housebrand. 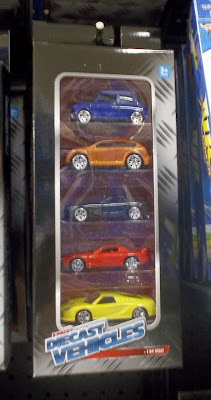 Fairly plain packaging for the Kmart range of Motormax 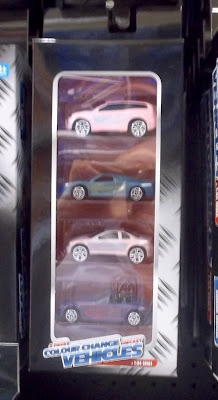 I've never understood the 'colour changer' car concept - but it must be popular as they keep selling them!
The internal packaging of the Kmart range is identical to the Motormax 5 packs that Target carries, what is different is the outer cardboard slip. Even the range of cars is the same. 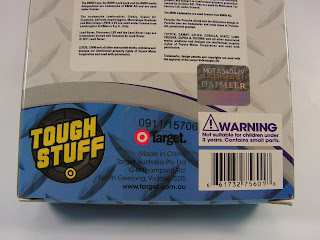 Kmart are also carrying Motormax cars singly. At one dollar, they offer very good value for money. There are only ten cars in the single boxed range. 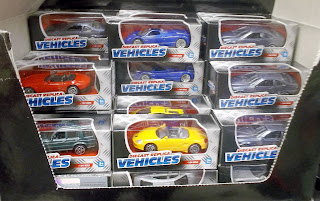 It appears that the Motormax singles and 5 packs at Kmart are replacing the Maisto 'Fresh Metal' range at Kmart. There has been no new Maisto stock for some time, and the peg space is gradually receding. Matchbox has had their peg space at Kmart reduced to zero!
Motormax are a brand that have been around for only a few years, but the history of the companies that precede them is long. They started as Zylmex or Z-Toys back in the 1970's sending three inch castings to the world from Hong Kong, then became Red Box and are now Motormax. Not only do they produce cars under their own name in several scales and price points, they also produce cars that appear under other makers names such as these house brand cars and more recently in Australia - the DDA EH Holdens in 1:64 scale.
What is the quality like ? Lets have a look at a 5 pack. I bought this 5 pack from K-Mart specifically for the black Mercedes SLS, so if anyone wants the other 4 - drop me an email and we can work something out! 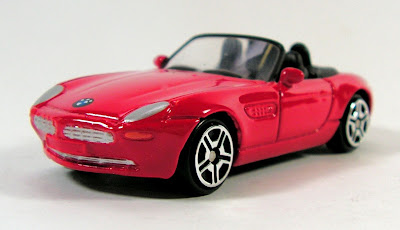 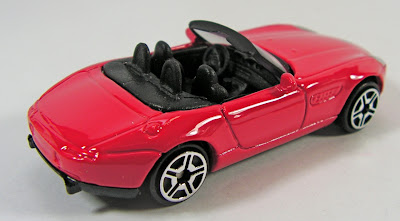 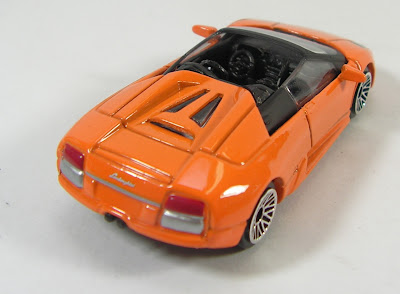 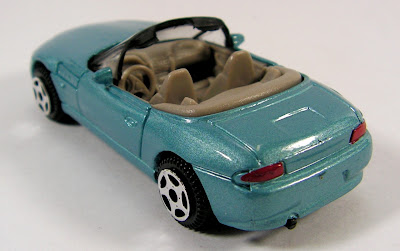 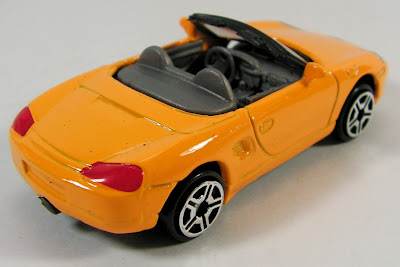 Porsche
To the rating:

Normally I would review each car - but this time I will apply the rating to the 5 pack. The cars have uniformly excellent paint, with accurately applied tampo painting for logos, tail and headlights and some grilles. The interiors are attractive for the scale, and the clear glass is a pleasant surprise in this price point. Some of the wheels on the cars look very toylike, with overlarge rims and small tyres, others look very good. At roughly a dollar each (a little more at Target) they are very good value for money and even if they are meant for kids to play with, some of these castings do deserve a home in the adult collectors collection.
Motormax 3 inch diecast cars - 5 pack (Tough Stuff - Target house brand)