I once saw some model vehicles meant for the deck of a model aircraft carrier. They were tiny, but still identifiable as vehicles. My eyes probably aren't good enough to identify this model, without access to a microscope. 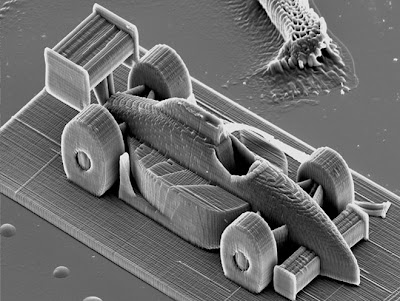 Very tiny Indy Car model
Photo from Wired 'Autopia' Blog
How small is this model ? It is 285 micrometers, or 1/100th of an inch. Smaller than a human hair or a grain of sand! It has been constructed by Austrian scientists using a very advanced form of 3D printing and uses resin as the agent to build the object with. They built this as a demonstration of the new technologies they are developing.
Of course one has to ask why Austrian scientists in Vienna built a model of an Indy Car, when they could have chosen from any of the fine Austrian cars that have graced the autobahns of Europe.
I'm not sure if they will be producing any other cars in this scale, or if this is a one off, but its an impressive demonstration of future scale model technology.
If anyone can advise exactly what scale this is - I'd be grateful.
Posted by D.C. Haas at 11:11 PM

Email ThisBlogThis!Share to TwitterShare to FacebookShare to Pinterest
Labels: resin, why i collect