Unlike last years Queanbeyan Swapmeet, this years had much better weather with no rain! There were many vendors selling diecast, not just in the dedicated diecast hall, but also scattered among the individual sites, with people just selling off parts and general car related (mostly) stuff. A full report on my two days at the swapmeet can be found on my other blog 'On Four Wheels'. 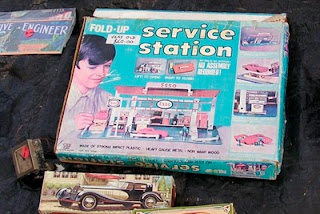 I came very close to buying this, but I have other 3 inch service stations that just sit in their boxes, and no room to display, so i left it behind for someone else to take home I did circle back several times while I ummed and aahed about it though. I think it was Australian made, from the late 60's. 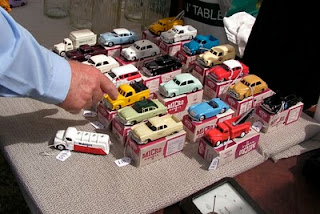 I've never seen this many Micro models in one place before. When I arrived serious negotiations were under way over the tanker in the front. It ended up going home with a gentleman. I own one Micro, and thought about buying a few more but none fitted my collecting themes. 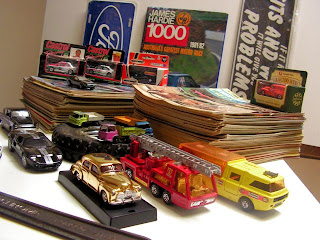 Here is my haul! Issues 1-100 of Restored Car magazine, in excellent condition, for an embarrassingly small amount. A few novelty number plates, a tyre ash tray, a 1982 Bathurst Book, a Sidchrome adjustable spanner - and 14 diecast cars. 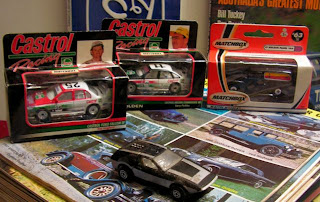 Matchbox 'Midnight Magic' in black and silver - the only diecast I picked up from the dedicated diecast vendors hall. It cost 2 bucks. A bargain I thought, although it needs a cleanup. Three Australian themed matchbox cars, a Falcon, a Commodore and an FJ. I already had the FJ and Falcon, but not boxed. 5 bucks each. 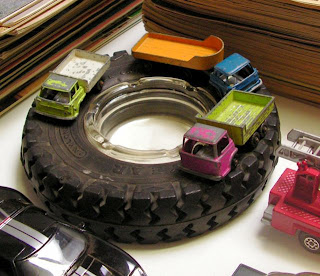 Three Fun Ho diecast. new Zealand made toys roughly Lesney sized. A Ford truck, a Bedford and an articulated lorry. All very rough, but complete. My first Fun Ho and as anything that you have more than three of is a collection... 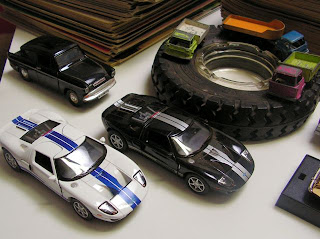 These two Ford GT's are kids toys. Made by Kinsmart. I picked them up and thought that apart from the odd 1:36 scale, not bad for 5 bucks each. The Anglia behind it was from the same vendor, and is also a kids toy, also in 1:36, by Saico. 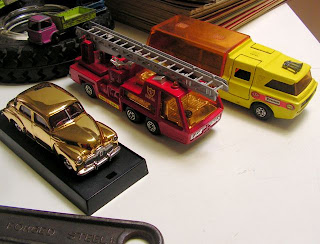 A golden Trax FJ Holden in 1:43 - I have no idea what its worth, but I paid about what it cost new. The two Matchbox Kingsize were IIRC ten bucks each. In excellent condition. The K-7 Racing Transporter has no racing car, but is complete apart from that, clean glass and stickers. I love the K-7, and have a small fleet of them.
Overall I had a great day looking for Ford and Leyland parts, old motoring books and magazines, and of course tiny cars. When I was laying out my treasures to photograph I realised I only bought one car from the vendors in the dedicated diecast building. Why? Several reasons- firstly, I already had a lot of the cars that they had on sale that fitted my collecting themes, secondly, many of the vendors have unrealistic pricing on their wares. Especially on items where the box is atrociously worn, and has obviously been packed and unpacked from show to show. If I am paying a premium I want it mint and pristine. One person had a recent range of 1:32 Australian cars on sale at 60 dollars each - you can still buy them at Toys'R'Us for 15 dollars less!  Then again, some vendors had quite reasonable prices and some would haggle. It never hurts to make a lower offer than the stated price - and I always do.

There were a few exceptions to this diatribe, and I must single out Trevor from Trax. Trax have always had a stall at this swapmeet, and they do sell their cars at their retail price, with a big array of show specials priced at 30 dollars. Sadly I already had everything on the table that fitted my collecting themes so I didn't spend a cent with Trax - but I had a great chat and found out a few things coming up from Trax.
Trax had a Legends 1:43 Brabham car on the table, so I picked it up and inspected it closely. It doesn't fit any of my collecting themes, so I haven't bought one, but I was very impressed with the first resin from Top Gear. Crisp lines, excellent detail for the scale, good paint, it was a really nice little model.

I had a great two days at the Swapmeet and recommend it to every car and diecast enthusiast. I spent some money, found some treasures and looked at great cars - all in beautiful Canberra weather.

Tuneup for your Superfast Matchbox car 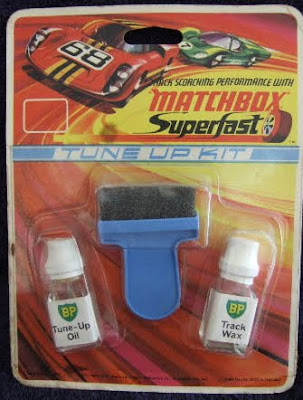 This is obviously meant for one of the early 70's Matchbox 1-75 range of cars, but what on earth is it for ? How do you use the tuneup oil ? Pop the tiny 1:87 hood and fumble for an equally tiny dipstick ? How on earth do you use the track wax ? Mr Myagi style perhaps ? And the brush ?


(photo from the Matchbox Community Forums)
Posted by D.C. Haas at 10:00 AM No comments: