How not to ship model cars - damaged in transit ebay purchase

When I sell things on Ebay, I mail them to their new owners using a new Australia Post box, and plenty of bubble wrap. I believe you should receive your car in the same condition as I would like to receive it. After you have paid me - it is your car. This is not how everyone thinks. Recently from Ebay, I bought a 1:32 Carrera brand 1970 Plymouth Roadrunner Superbird. I dont collect slotcars and I dont collect 1:32, but I do collect Superbirds. I won it really cheaply - it cost $8.95. 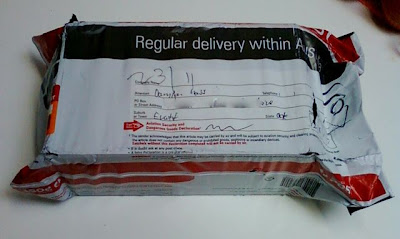 A few weeks later, I receive a card to come and collect a parcel. The card from Aus Post asked Darren Raggs to come and collect a parcel. It took some minutes of negotiation to convince Aus Post that I was who I was, that the seller had just scribbled a name instead of printing it, Raggs sort of looked like Haas etc, and that I could predict the contents if they opened it at the PO counter. They were convinced, and let me take the parcel. I use this PO several times a week, so I think that also helped. 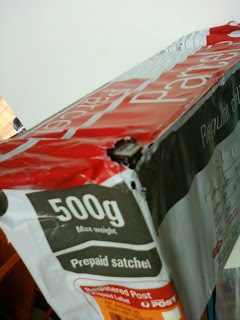 As I walked off with it I could hear rattling, could feel hard plastic or a box, and noticed several tears on the plastic reg post envelope. Not good. 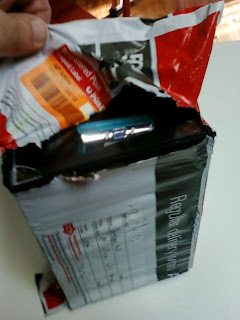 I decided to photograph the opening, and sadly I was presented with a Superbird with no wrapping, protective or otherwise. None whatsoever. The seller has just jammed the car and display case into a plastic envelope. Jammed is the right word too, as the plastic envelope had been stretched and pulled over the plastic display case. No bubblewrap or foam beads to be seen anywhere. I could see the first breakage as I made the first opening cut. It was very disappointing. 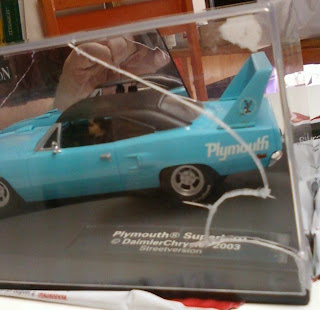 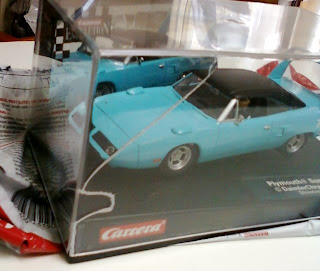 Same on this corner 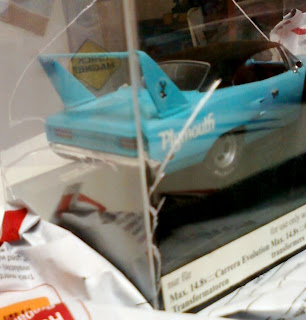 Back is smashed also 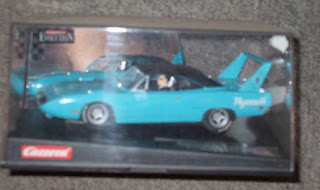 This is the Ebay ad for the car.
As can be seen, by not wrapping the car in bubblewrap and then placing that into a box, then mailing it, the seller has guaranteed that the item will be damaged in transit. I just cannot understand the thinking of the person who would do this.

I paid for registered post, so obviously the seller is thinking of their own protection, and there's nothing wrong with that, but they certainly were not thinking of the safety of the item they had sold me.

If there is one positive, it is that the Superbird is undamaged. The display case is unusable though.

After looking at the damage, I emailed the seller to tell them what had happened. I indicated I would be leaving negative feedback. That was four days ago, and they haven't responded. Today I left negative feedback and a comment that the item was sent with no protective wrapping, resulting in damage.

If any reader mails cars, please look at these photos and appreciate how a few moments with some bubblewrap and tape, and using the correct mailing media for the item can ensure that damage such as that shown here, will not occur. Bubblewrap is your friend. It is also the reason I use Aus Post boxes, foam beads and bubblewrap when I mail cars. People occasionally whinge at the cost ($7 minimum) but perhaps now they can understand why I wrap cars so carefully before mailing them.