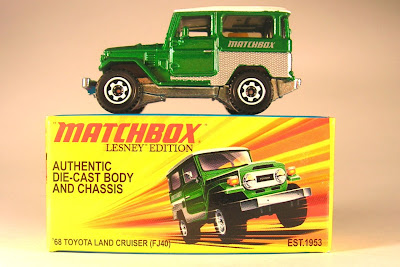 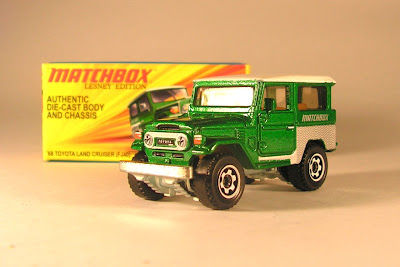 These  cars have been keenly sought after by collectors of Matchbox cars ,and even retailing at around three times the price of a regular Matchbox model, the majority of the range has been a sales success.
I thought that it would be a good idea to look at a Lesney Edition casting and compare it to the same car from the regular range. In this post I look at the Toyota Land Cruiser in its Lesney Edition guise. In the next post I will look at the regular edition Toyota Land Cruiser. In the final of this series, I will compare the two cars. 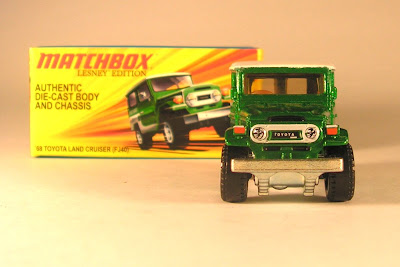 The 1968 Toyota Land Cruiser has been seen in many model versions. The Matchbox contribution to its model heritage first appeared in 2009, in a yellow version, with a white roof. It has made nine appearances since then, including this Lesney Edition. At approximately 1:58 scale, it is a nice looking casting that fits nicely into Matchbox's range. 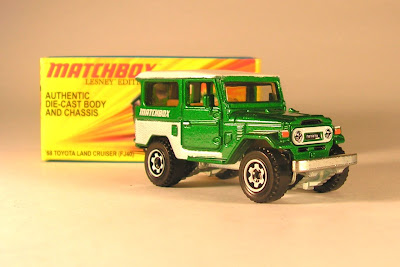 The Lesney Edition has a metallic green paint job, with white roof and silver checker plate lower sides painted on. 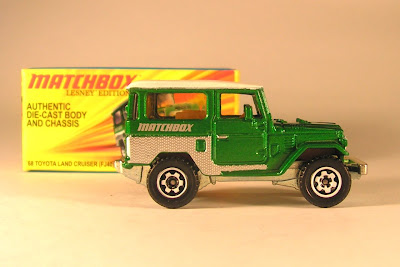 The wheels are a standard Matchbox wheel type, and the same wheel as used in the 2009 regular series Matchbox Toyota Land Cruiser. 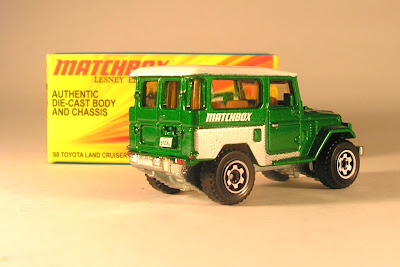 Tampo painting has been used well, picking out headlights, grille, TOYOTA grille badge, taillights, numberplates and door handles. Matchbox even paint their name on the sides. 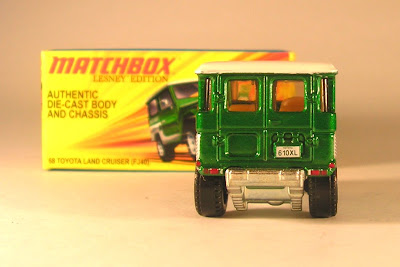 The smokey glass looks good, and matches the light brown interior, which isn't too detailed. You can make out seats in the front and back. 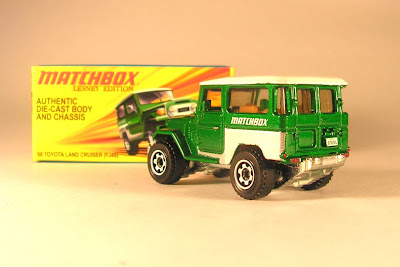 The car looks very good. it is an accurate model of the fullsize car, and has the right stance. The wheels are too modern and wide for a genuine 1968 car, but this is a toy, and it may also be a customised version of the 1968 car, so the paint and wheels may reflect a more modernised version. 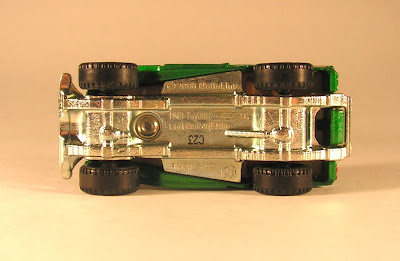 The metal base is not overly detailed, but does show the leaf suspension and differentials for the front and back, and model identification. 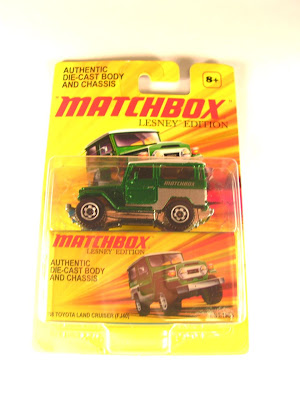 The Lesney Edition blisterpack is very different to the regular series blisterpack, and carries an old style logo, and a separate cardboard box for the model. It is an attractive package. 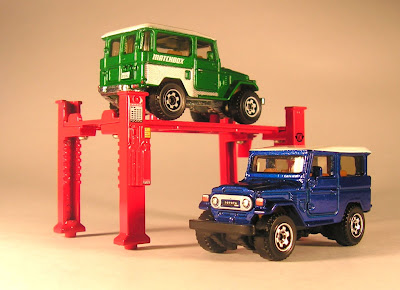 At three times the regular cost of a Matchbox car, you get a cardboard box, a metal base and extra tampo printing. it is a steep premium to pay on top of a matchbox regular series model, but has been well received. When assessing this model, I do take this into account.
The rating:
Matchbox Lesney Edition 1968 Toyota Land Cruiser
Quality   7
Design    7
Colours   7
X-factor  6
Rating: 27/40
See also:
The Capital Diecast Garage Aussie Diecast Forum *NEW*
Hot Wheels '77 Dodge Custom van - black with Flames!
Matchbox '68 Toyota Land Cruiser (soon)
Lesney Edition versus regular series Matchbox '68 Toyota Land Cruiser (soon)
Posted by D.C. Haas at 8:03 PM