Hot Wheels shook up the Australian diecast collector community in 2009 by releasing the classic Ford Falcon XB Coupe. It has become a firm favourite of diecast collectors and members of the general public, and every version (five so far) has been eagerly snapped up. They look set to repeat this sales generating venture again – with a contemporary Australian car. New for 2012 is the Ford Falcon V8 Supercar.
The V8 Supercar racing series is Australia’s premier motor racing competition, with fierce rivalry between the teams, and great interest from motor racing fans. The annual Bathurst 1000 race is a holy day on the Australian sports calendar. Currently there are only two manufacturers with cars in the series – Ford and Holden. That rivalry is fierce. 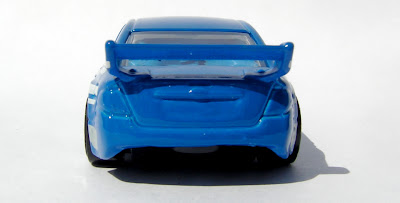 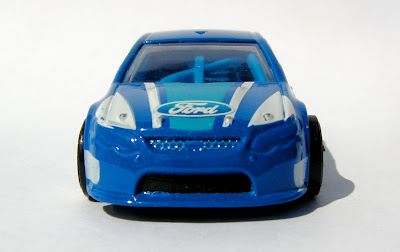 Front view
Although the cars look like the road going versions, apart from the fact that they are wearing elaborate wings and body kits and painted in garish team colours and sponsor decals – they are really silhouette racers. Under the body panels are custom designed, controlled chassis and running gear. Apart from the engines and body panels, almost all the cars are identical. These cars are at the peak of racing technology in Australia and can reach speeds of over 300kmh down the famous Conrod Straight at Mt Panorama.
Current releases of V8 Supercars in this scale from Biante and Classic Carlectables have slowed to a trickle recently – reflecting a recent sales slump across the general diecast industry. Investment in a car that may not sell more than a few hundred versions is not good business sense. That Hot Wheels have decided to make this model can only be a positive thing. Although this retails for a few dollars and the other 1:64 V8 Supercars retail closer to the 20 dollar mark (offering far greater detail, accurate liveries and higher quality packaging than the average Hot Wheels car), it may spark greater interest in this scale of cars overall. 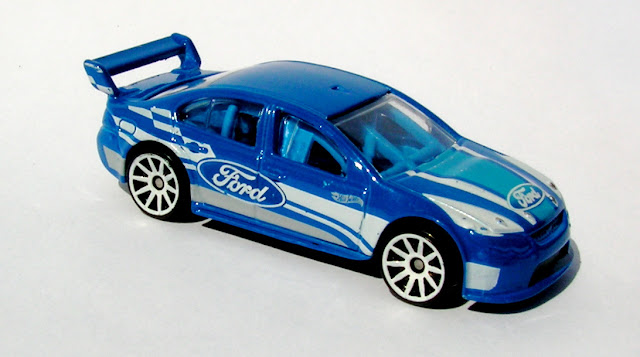 The model itself looks like it should – it is a toy racecar with attitude. It comes packaged in the standard Hot Wheels blister pack for 2012, and has snuck into Australian retailers a little early and can be found now. It should be a very popular casting for Hot Wheels with collectors and customisers.
The body casting looks like a generic V8 Ford Falcon supercar, although it sits a little higher than a real one, and has no camber on the wheels at all! The proportions of the body are in typical Hot Wheels fashion, a little exaggerated. The wheel arches are massively larger than they would be on a true scale model of the car. Although they have the proper bonnet bulge, the rear wing is a little small. The B pillars are also a little bigger, and the C pillar a little narrower than they should be. The front windscreen is the biggest inaccuracy on this model – its straight at the bottom, not curved like the real thing. Hot Wheels have moulded in the NACA duct on the roof (for cabin ventilation) but have not added door mirrors.

This angle really shows how poor the applied paint is 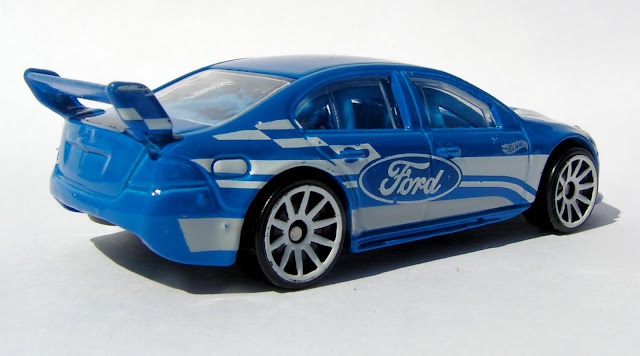 The same angle, other side, same poor paint issues
The first offering of this model from Hot Wheels is in Ford racing blue, with a bold white racing livery. Ford logos appear on the car several times, as well as a few tiny Hot Wheels logos. It’s a two colour paint job only, with the white paint being laid down over the blue. Its not Hot Wheels finest paint either, with the blue visible through the white paint. There are serious paint issues with this model, and if you bought a 1:43 scale car with the same quality you would return it for a better example.
Tampo printing is miserly with no detail picked out at all. Headlights, taillights, vents – nothing. All you get with this car is the blue body and white racing stripes and logos. Oddly, there is a slightly different shade of blue used for a wide strip on the bonnet.
The glass is also problematic, while the front and rear windscreens are fine, the side glass does not sit flush. However, that’s only when picked up and examined closely. From a few feet away, it isn’t noticeable, and I’m sure when its racing down the orange track no one will care. 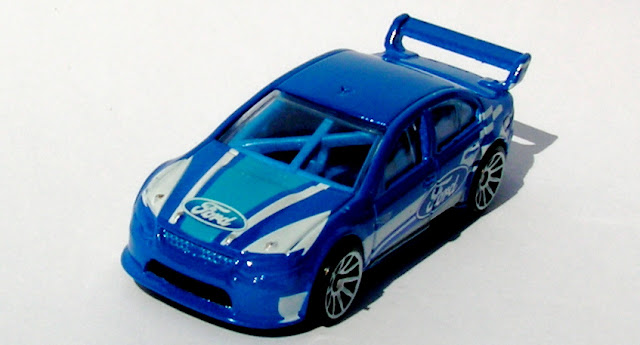 You can make out the excellent interior and also the very wrong front glass. 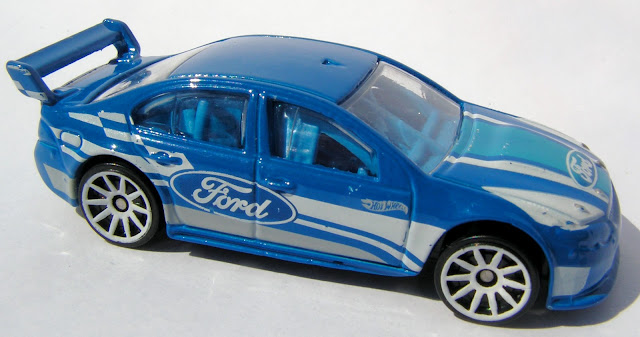 The interior is the real surprise with this model. It is in blue plastic and looks to be a fairly reasonable facsimile of the interior of a V8 super car, with elaborate roll cages and bracing in the cabin. You can also see a single drivers seat and a tiny gear stick and steering wheel. When they inevitably use this casting as a taxi, this will look odd. Right now, it looks great, and will no doubt appeal to customisers.
The black plastic base contains a small amount of detail, the most noticeable being the triple exhaust exiting from the passenger side. You can also make out adjustable rear suspension bars! The front part of the base is also used behind the central part of the front bumper to represent the lower radiator area, and looks good, especially as there is no other detail on the front area.
The wheels are a treat, being ten spoke wheels which look like those used on V8 Supercars. They are black plastic 10 spoke wheels, with the spokes picked out in white. This matches the white paint on the body. The wheels roll freely and although far larger than the real cars wheels do suit the casting.

Matchbox AU Falcon from a few years back, next to the Hot Wheels Falcon Supercar.

Although I have been critical in some aspects of this car, it is a casting with great potential. In its first version, Hot Wheels have cemented the fact that it is a Ford racing car, and when flicking through the blister packs on the hangers, it won’t be mistaken for anything else. It is also a casting that has promotional potential. I can see DJR or another racing team ordering many thousands of these as give aways. Customisers will also welcome this model.
The 1:64 scale Hot Wheels Ford Falcon Race Car is available from retailers for around $2.20.
Positives
Nice to see another Aussie car in Hot Wheels line up
A casting with potential
Negatives
Hot Wheels exaggeration to body proportions
Paint quality is very average
2.5 out of 5 stars
Note: This article was originally written for Detail magazine, but not published. The rating system is for that magazine and not that used by me for this blog.
See also: