I cant imagine ever paying $8,000 for a hotwheels car - but someone has! This Ebay auction of a car from the Mike Strauss collection sold recently for that sum. The car was  a Rodger Dodger from 1974. The photos are from the Ebay ad for the car. 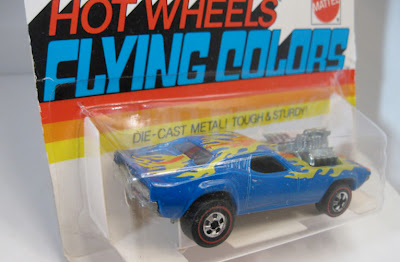 The ad description talks a lot about the provenance of the car, the collection it is from and the fact that it was used as the model for the Tomarts price guide. The details of the actual condition are rather shorter than the schtick. It says"REDLINE FC BLUE RODGER DODGER BP. This car is SMOKIN nice!!!..The card is unpunched but has some wear. The bubble has a slit top rear as seen." 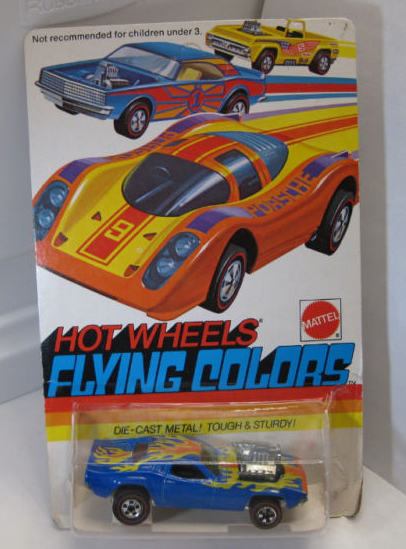 The Rodger Dodger model was designed at Hot Wheels by Larry Wood and debuted in the 1974 Hot Wheels Flying Colour range in a colour called Plum. it stayed in the range until 1979 and the casting was then retired. It was brought back in 1998 and is currently used in the Hot Wheels Military Rods line in Satin Olive Green and white tampo printing. 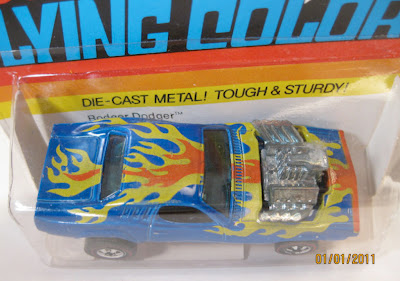 Interestingly, this variation was not listed in the Hot Wheels Wiki, but I did find it at my other favourite Hot Wheels info resource the South Texas Diecast Collectors Hot Wheels guide. They had its value at loose - $2200 and in card at $3500. It came out in two colours that year, Blue - as seen here, and Plum. The Plum variant is also scarce, and is listed at $70 for a loose version. This appear to be the only time the casting ever appeared in blue, plenty of pinks, blacks, chrome and gold, but only once in blue.


I do not know what the highest price paid for a single diecast car is, or what the highest price for a Hot Wheels has been, but you have to concede that $8000 is a lot for a car that can still be bought for a few dollars in its new guise, down at Toyworld. I cant see myself ever paying eight grand for a diecast car, especially since I have beaters in my 'wrecking yard' box of the same vintage as this car! Still, I'm glad that someone has placed a value on this car as it makes a diecast collection more than a hobby - its an investment portfolio!
Posted by D.C. Haas at 5:46 PM