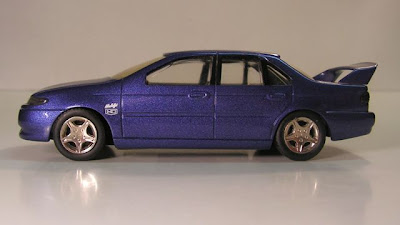 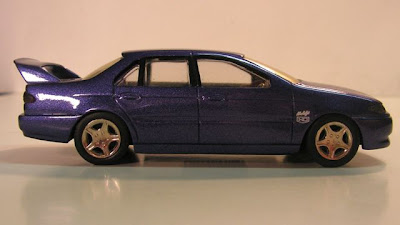 The EF Falcon is a largely under represented car in Australian diecast. It had a couple of contemporary releases, but few of late. Even this era of V8 Supercar racing and associated releases is a sparse area. One diecast company that did offer the EF Falcon was Dinkum Classics. And the version they offered is a rather curious choice - Its an Allan Moffat HO Special. 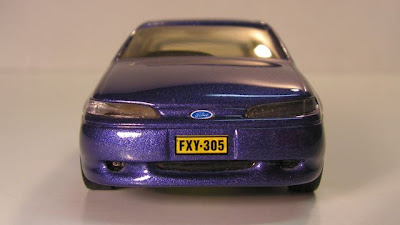 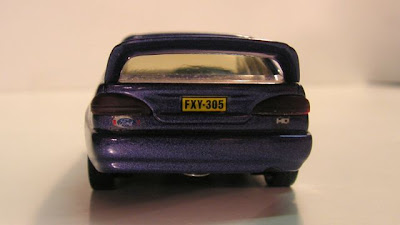 Dinkum was never big on over detailed cars, but for the time the detail was pretty good. HO and Ford badges are clear and distinct. Im pretty sure the Moffat HO's had vents on the bonnet, but they seem to be missing on the Dinkum Classics version. 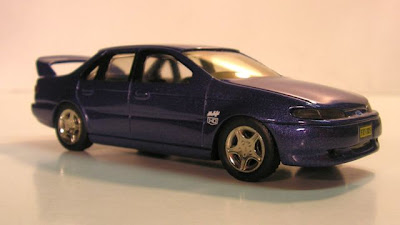 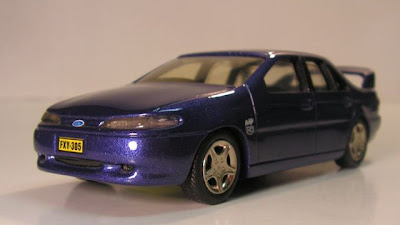 Allan Moffat signature and HO Special badge look good, as do the special 17 inch rims, not common in the early 90's. 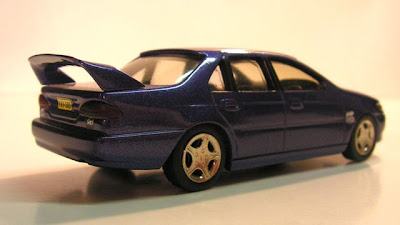 That rear wing was controversial and Australia hadnt seen anything like this on a road car before. Its not quite a Dodge Daytona wing, but it really makes this car. 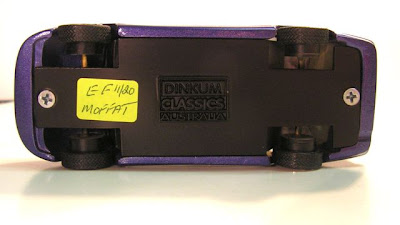 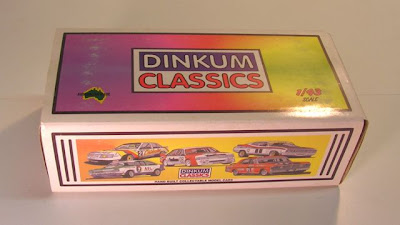 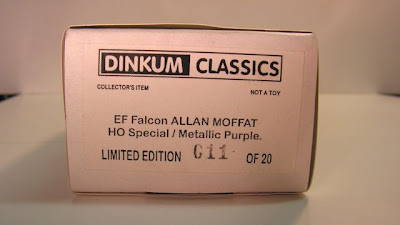 This is a low run for any diecast model. The HO Special was also offered in other colours.
The EF was the pinnacle of design for this particular body, although with the grille and bonnet being so aerodynamic, there were serious problems with under bonnet heat. The bonnet vents introduced on the GT's were soon seen on everything from the GT to taxis in an attempt to get the heat out of the engine bay.

The car that this is modelled on is a curious choice. Ford dropped the V8 in the XE model and it didn't return until the EB sedan. Many people had a go at turning out performance versions of the sedans that were used in Group C, group A and then V8 Supercar racing. Brock and HDT were the most successful. Dick Johnson also had a shot, as did Allan Moffat.

The first Moffat HO special was an EB and they came in supercharged six and supercharged V8 versions. Attention was paid to suspension and trim, but the main reason to select the Moffat HO was the name and the extra performance - which exceeded the XR options from the Blue Oval. It also came with 17 inch alloy wheels, high performance tyres, and a serious body kit: front spoilers, side valances, bonnet scoops  and a rear wing. All aimed at making the ordinary Falcon into something approaching the racing version - at least to the eye! Sadly, very few of these cars were ever made - the run from EB to EF seeing perhaps as few as 15 sold in total.
I think it is important to assess all diecast cars in comparison to their contemporaries, and Dinkum Classics are no exception. This car is less toylike than the Trax of the day, and more of a collectors model. This car is nearly 20 years old and still looks good. Produced in Australia and nicely presented, this is an important car to have in your collection. Allan Moffatt was a major figure in Australian Motorsport, and small chapters in his motoring biography represented by this Dinkum Classics offering are nice place markers. It was a niche product then - with this being one of 20 produced - and is scarce now. Although its rating is not as high as other cars, this car will stay in  my collection.