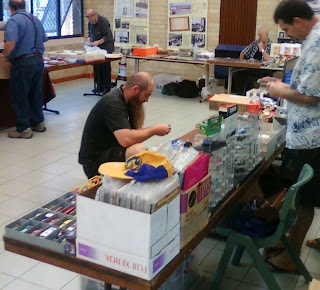 Setting up
Steve Maher is a comrade of mine from the Leyland P76 movement and knowing that I am a diecast tragic, has long recommended that I make the journey from Canberra to Granville for the regular diecast swapmeet that the Sydney Model Auto Club run. So yesterday I decided to drive up today and have a look. The drive up from Canberra was actually quite pleasant for Sydney traffic, and took less time than anticipated. The swapmeet venue is at a Catholic school in Granville, using their hall as the main trading area with tables arrayed quite densely, and tables also available outside the main hall.
As I arrived early, I started spending money even before I went inside! Some of the vendors on the tables outside had cars I was looking for, and also cars I already have. I resisted, mostly... I wandered around the tables setup outside for a good 20 minutes before walking in - where an efficient but friendly gatekeeper arrested my passage and tapped his watch indicating I had a good 15 minutes to wait. This was OK, and I chatted to fellow diecast tragics also waiting.
I was genuinely surprised at the great range of cars arrayed. Everything from tinplate to the latest 1:18 Supercars. There were quite a few professional traders and also a lot of people with a small table selling spares or a few bits. I was really pleased to see that one vendor had a few boxes of spare dinky, corgi and matchbox tyres. Now I know - I can take a few samples and fit out some of my cars that are up on tiny diecast blocks. 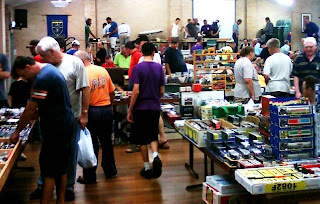 Main area
Once inside it took me a good 90 minutes to make my way from the main entrance right around. You would be amazed how many tables and people you can pack into a school hall. I also went back to a few vendors a second time to pickup and scratch my chin and think about some cars I passed on earlier. The doors open at 6.45 PM, but all of the vendors arrive earlier, and I am in no doubt that collector/vendors probably swap or snap up a few choice cars before 6.45!
It was interesting to note that the Hot Wheels XB GT Falcons are readily available at the Granville swapmeet with prices ranging from $4 to $25. The market in Yellow XB's appears to have been satisfied, red XB's are still scarce but a few vendors had them. Saw a few Matchbox VE utes as well. In general - if you want Hot Wheels or Matchbox cars - go to Granville. New in blister pack Hot Wheels - a buck. Mint loose - from 50 cents. Many holes in my collection were filled.  I doubt I will ever use Ebay to buy Hot Wheels ever again, if I cant find it at Granville i'd be surprised.
I didn't spend a great deal of money, but I did manage to pick up a few cars I had been after for some time, and also a few that I thought were bargains. There were cars I passed on due to the vendors price, but overall I would say that prices were reasonable with haggling welcome. As I have already mentioned the range of diecast on offer was extensive. There was also some odd items - such as a timplate Zeppelin about 5 feet long.
It was a really good educational experience as well, with lots of tiny cars that I was interested in and was able to pick up, have a close look, ask a vendor a question. They all knew their stuff. They would also ask what I was interested in. Surprisingly I managed to find some Fun Ho! and some Streamlux.  As I am interested in 'pre-going broke and remade in the 80s/90's Fun Ho!' I found but passed on some others.
As I am also interested in getting a Canberra Swapmeet running, I spoke to a few vendors about that as well, they seemed quite keen - which is a good sign. One in particular spent quite some time explaining how he operates, what he likes, what he doesn't like etc. Every question I asked him he answered with a carefully considered view or opinion, based on years of experience. Exactly the info I need. 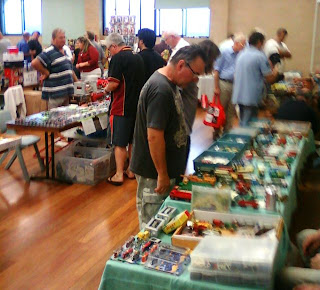 See those plastic boxes in the lower right corner... full of spare dinky/corgi/matchbox tyres!
There were also a few vendors from Canberra that I introduced myself to. Every one of them told me that Canberra used to have a swapmeet. I did forget to talk to a few vendors about it, usually they were in the middle of a transaction and I didn't want to interrupt them, or I got lost in a moment with a car trying to figure out if I had it already etc. If they read this I apologise to them for forgetting, it wasn't personal and I will try and speak to them about it next time. Or they can email me... capdiecast at gmail dot com
The only odd moment of the night for me was quite surreal.
I bought some cars off a vendor, he had older pre 1970ish diecast and good stuff too. We haggled and he knocked five bucks off two cars. A good deal I felt, not cheap but reasonably priced.  I was chatting to him about my proposed Canberra swapmeet, he seemed interested - then I gave him my card and he looked at it, the cogs started whirring, and he remembered me - I had given him a neutral rating on an ebay transaction a few years ago and he was still furious! To say he went OFF would be an understatement. He gave me back my card, said I could insert it somewhere, he didn't want to talk to me, I wrote crap about Leylands etc. He was very emotional. I was quite taken aback. It all sort of poured out... I tried to reason with him, but it didn't help. Let me put this in perspective - I'm a qualified mediator - and I still couldn't even begin to reach a point where we could discuss the matter. Glad I didn't give him negative feedback!
Wow - I would have given neutral or negative feedback a handful of times. Seriously - very very few times. The incident he recalled quite clearly related to two Trax cars I bought from him - he did not mention in the ad that they had no boxes. They arrived. I was pissed off. I gave him a neutral feedback.
He still felt very raw about it, so I apologised to him. He refused to accept my apology, saying he had to live with that damaged reputation for a year on his feedback profile. As I said - he was quite emotional, it had really affected him. Then he walked off on me and went to talk to someone else.
When I got home I had a look through the emails relating to the transaction,  and I must admit he has a point. I perhaps should have emailed him after I received the cars and discussed it with him. I can understand why he was and still is pissed off. I was fairly new to ebay at the time, so I probably acted far too hastily. I guess I have to be honest here and recall the key thing I have learnt on how to deal with people that I have found to be truly effective - treat people how you would like to be treated. In this instance, I didn't. I was in the wrong. What can I do? I have already apologised to him in person, in private, but perhaps it should be public - like Ebay feedback.
I publicly apologise to Bob Williamson for affecting his Ebay feedback score. I should have discussed the matter with him before posting the feedback that I did. I was wrong to act so hastily before discussing the transaction with him.
Apart from that, the rest of the evening was tremendous. I had a long yarn to Steve about Leyland matters (all car clubs have politics and gossip), but was slightly disappointed he didn't have the prototype of the 1:43 resin Leyland P76 London-Sydney 1973 Rally car with him.
The Sydney Model Auto Club organise and run the Swapmeet very efficiently. It had a good mix of professional stall holders and people selling off spares, with a great atmosphere. Everyone was knowledgeable and friendly, and really interested in what you collected when you talked to them. Its definitely worth the trip from Canberra. I wont bore you all with a detailed report on my trip back to Canberra in the XF V8 Panelvan in the rain with a wiper intermittently failing to wipe... but I did get back home in time to catch the Abu Dhabi V8 Supercar race  on TV.
See also: Canberra Diecast Swapmeet 2011?
Posted by D.C. Haas at 8:43 AM

Email ThisBlogThis!Share to TwitterShare to FacebookShare to Pinterest
Labels: diecast, ebay, swapmeet, why i collect