The Matchbox Super King K7 Racing Transporter is without question my favourite Matchbox Super King casting, and one of my favourite models. It came out in two different liveries - yellow Team Matchbox, and white Martini Racing. The casting had minor changes, mainly to the cabin over the years, but the basic shape remained the same while it was produced from 1972 to about 1980. 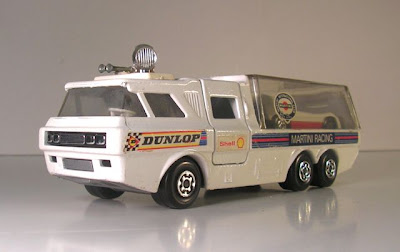 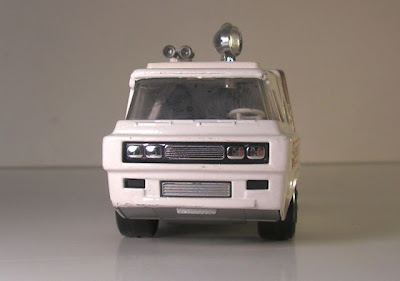 Sadly I dont own a mint in box version of the white Martini racing version of the K7, but I did pick up this mint version last year. Its almost flawless, apart from some minor rubbing on the base and a minor blemish to one of the stickers. The rear glass has a minor crack, and all parts are present, and so are the stickers. I doubt this car has ever been used by a kid on his loungeroom carpet. 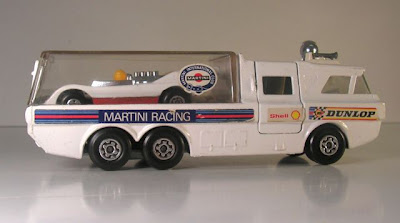 I have only a clear rear glass variant of the Martini Racing K7. The white and yellow K7's came out with clear and orange rear glass. You can tell if the glass came with the K7 you are looking at as the rear glass and cabin glass match. The major difference, apart from glass colour and paint, between the two versions is the roof castings. On the yellow K7's there are three horns, on the white K7's there is a strange spotlight arrangement that can be rotated and two horns, on a rectangle base, that fits on the K7 roof. 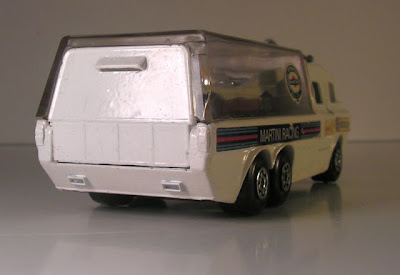 I've seen red rear ramps on Martini Racing K7's - this one is white.

The base of the K7 - it appears to be the same on all versions right through this castings run.
At some point I will post a complete listing of all the variations of the K7 that I am aware of. I've been collecting info on this casting for several years and tracked it through UK and US catalogues, and bought different versions that I come across if its a variant I haven't seen. I even bid for a 'cream' K7 only to find it was a yellow one that must have been bleached!
If you have a version of the K7 that isn't yellow or white, or if you have any pre-production versions - I would really like to see photos of them. Please email me at capdiecast at gmail dot com or leave a comment.